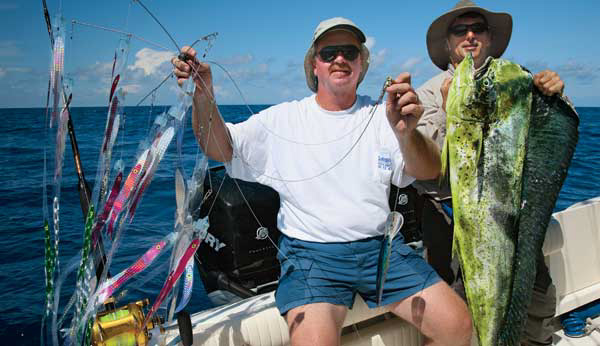 Dredges boost the fish-raising ability of just about any offshore boat. That's a hard fact. Add a well-honed crew, and the surge in both the quantity and quality of catches over the season will raise eyebrows. I know from experience.

Beginning two and a half years ago, I added a 6-arm, 96-fish StripTeaser (305.899.2609; stripteaser.biz ) dredge to my trolling game. And this past year, I began deploying a second one off the opposite side of the transom. Coupled with a pair of surface teasers, my 28-foot, outboard-powered center console has been raising dolphin, wahoo, sailfish and marlin nearly to its transom.

Just this past June off Bimini, two big dolphin came in behind one of my dredges; the 26-pounder slammed a lure placed behind the dredge, and the 33-pounder fell victim to a pitch-bait ballyhoo. Judging by the fish we're raising and catching close to the boat — and the ever-increasing bite and bill marks on the plastic strips and fish — I plan on keeping these dredges in play for many moons to come.

Lead It Be
Whether adorned with natural baits like mullet, mackerel or ballyhoo or with holographic fish cutouts or even imitation rubber fish, a dredge works its magic beneath the surface. To take this illusion deeper beneath the waves, a trolling sinker is affixed to the front center of the dredge. The exact weight is based on the size of the dredge and desired depth at the anticipated trolling speed. However, weights commonly range from 16 to 48 ounces.

For mid-size offshore boats like my center console, dealing with large dredges has its challenges, like getting them out of the way when a trophy-size fish is hooked up (we wedge them between the transom coaming bolster and the portable cooler we take with us). A trolling lead just adds another heavy obstacle to deal with. While this doesn't slow a crew aboard a large sportfishing boat, it can impede a two-man team on a small or mid-size boat. Then there's the concern over the trolling weight banging and chipping the gelcoat. Enter the swimming-plug alternative.

Swim It Down
Using a deep-diving swimming plug to take a dredge into the depths is a smart and effective alternative to a trolling lead. Rigged properly, the swimming plug can attain depths greater than a trolling weight due to the action of its lip. What's more, instead of a lifeless lead weight in front of the dredge, you now have an attractive, large "baitfish" that appears to be scrambling for its life ahead of the pack. There's virtually no weight to it, making it a snap to handle, and its plastic body is gelcoat friendly. And you won't lose sleep over a wahoo stealing the swimming plug because it's attached with heavy cable; odds are it will survive to tease fish again and again and again.

The Hot Setup
After choosing a swimming plug for the job — models with the longest and widest lips prove most effective — remove all its hooks. A popular swimming plug for small to medium-size dredges is the Mann's Stretch 30; however, the Stretch 40 is better suited for large dredges. Rig the system with 480-pound cable for the smaller plugs and dredges and 920-pound-test cable for the larger ones. 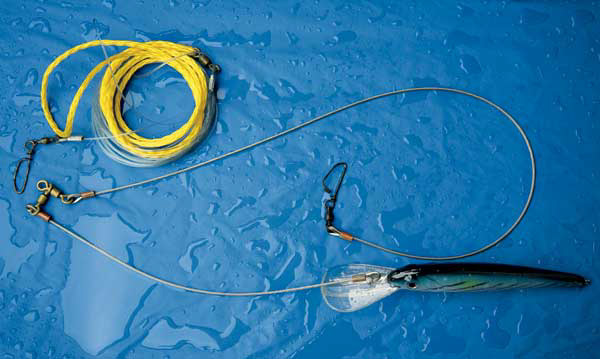 The hub of the system will be a 500-pound-test, 3-way swivel (in this case, the type with two swivels interlocked). Where the two rings are joined is the top of the system. The available eye at the interlock is the leading eye, where the hand line from the boat connects. After identifying the leading eye, crimp a 30-inch length of cable to the rear ring of that swivel.

At the end of that cable, place a thimble around a 300-pound-test Sampo Ball Bearing Snap Swivel and crimp the connection. This snap swivel will attach to the dredge.

To the rear eye of the second swivel, the one lying 90 degrees to the main swivel, crimp a 20-inch length of cable. At the other end of this cable, connect the swimming plug. Place a thimble around the plug's split ring, snug the cable tightly around the thimble and then crimp the connection. That's all there is to the terminal arrangement.

The dredge will be attached to ride about 10 inches behind the swimming plug on its own independent cable. This arrangement gives the plug plenty of latitude to dig, dive and swim without tangling in the dredge and still keeps the system beneath the surface.

Sleight of Hand
I use a hand line to deploy and retrieve each dredge. Mine consists of a Sampo 300-pound-test, ball-bearing snap swivel clipped to the leading eye of the 3-way dredge swivel, crimped to 30 feet of 400-pound-test monofilament fastened to 3 feet of nylon rope, which fastens to a transom cleat.

Deploying the subsurface teaser involves attaching the dredge to the ball-bearing snap swivel on its cable leader and then attaching the swivel from the dredge hand line to the leading eye of the three-way swivel. Next, unfurl the dredge hand line and secure its nylon rope to a transom cleat. After making sure the hand line won't tangle feet or tackle, slow the boat to a crawl and drop the dredge over the transom. Let it out until the swimming plug digs in. Continue to pay out line under moderate pressure until the rig lies straight behind the boat and then tie it off and resume trolling speed.

Finally, make sure you place a surface bait just behind each dredge, and keep a pitch bait handy should a fish move in on the dredge and overlook the trolling baits. Chances are you won't have to wait too long.