Or why the name MARC VI

I'm frequently asked why my boat is called MARC VI, a name that has remained the same since 1979. I wish I had an exciting answer!

It began somewhat as a family tradition. My father, a dentist in Bay Harbor Islands, Florida, was an avid sport fisherman who named his boats after his children. There was the George/Marc, followed by the George/Marc/Melanie when my sister arrived, and the George/Marc/Melanie II soon after that. About the time I was able to drive and trailer the family boat, dad's interest in fishing had slowed and he downsized to a 16-foot bay boat. By comparison, my interest in fishing had just shifted into high gear!

The 16-foot bay boat we had owned at that time was used almost exclusively by me. Being a typical teenager, I often ignored dad's stern advice on not leaving the protected inshore waters of Biscayne Bay. On those calm days, it didn't take much convincing for my friends and me to give the seatrout, snook and tarpon we fished for in north Biscayne Bay a break and venture out of Haulover Inlet for bigger game. During what seemed like a continuous cycle of being caught and grounded for our ocean exploits, I quickly learned two important things: First, never let your dad find dolphin, wahoo, grouper, or snapper filets in the refrigerator when you were supposed to remain in the bay! Second, if busted, never try convincing him that those fish were caught in the bay! It was obvious that my passion for offshore fishing was too strong, and to avoid future clandestine trips into the ocean, and possibly a mishap, the small bay boat was replaced by a Mako 23-foot center console in 1977. 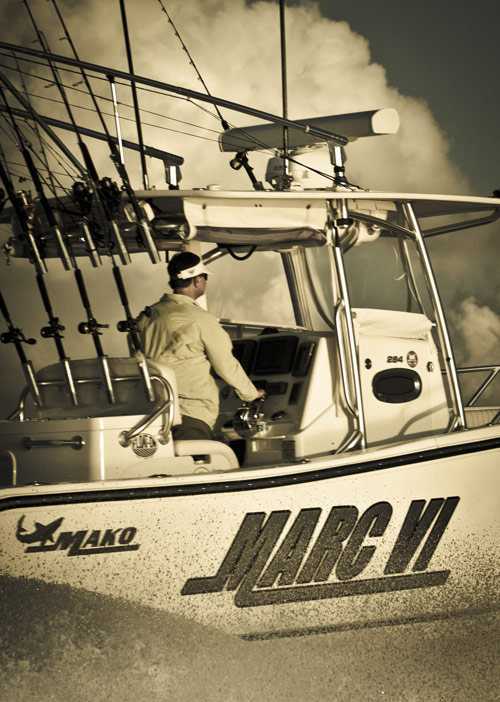 After deliberating over what to name that boat, we opted for MARC V. It was the family's fifth boat, and was named after the one member who didn't enjoy fishing and boating - my brother! To this very day it practically takes an act of Congress to convince him to go fishing. And on that rare occasion when he does go, he'll protest vigorously over the 6:00 a.m. departure. To him, a perfect fishing day begins at the crack of noon, and ends two hours later! Also a practicing dentist, Marc favors hockey, football, and auto racing, as well as writing and composing music. In 1979, the 23-foot Mako was replaced by a 25-footer named the MARC VI, which I took over. In addition to our normal fishing outings, my friends and I campaigned that boat on the Mako Owners tournament trail. Totally different than the Mako Owner "Funaments" of today, those early gatherings were much more serious. It wasn't unusual to have as many as 80 boats in one event, with a 40-boat field considered small. Awards were primarily for the most outstanding catches, and a "weather day" wasn't heard of. If it was rough, you either stayed ashore, or got beaten up trying to catch fish. We always chose the latter.

Even though fun and camaraderie were the underlying theme of the Mako outings, there existed a nucleus of about a dozen or so hardcore fishermen that fished several events each year. We were in that group, and had a blast competing against our fellow Mako fishing fanatics. The tournaments in Palm Beach, Key West, Islamorada, Cape Canaveral, Walker's Cay, Jupiter, and Destin were pretty much annual stops for us. We did very well, and won the "Angler of the Year" title four out of the six years we competed for it.

When the MARC VI was sold and replaced with a newly redesigned Mako 25 in 1984, I decided to keep the same name and number from that point on. Credit that to the great times and great fish caught aboard the original MARC VI.

NOW ! Take a trip back in time and visit the MARC VI archives; a collection of photographs of the MARC VI from 1977 to the present. CLICK HERE