Bottom Fishing In The Florida Keys

Post-hurricane fishing can be red hot in the Keys 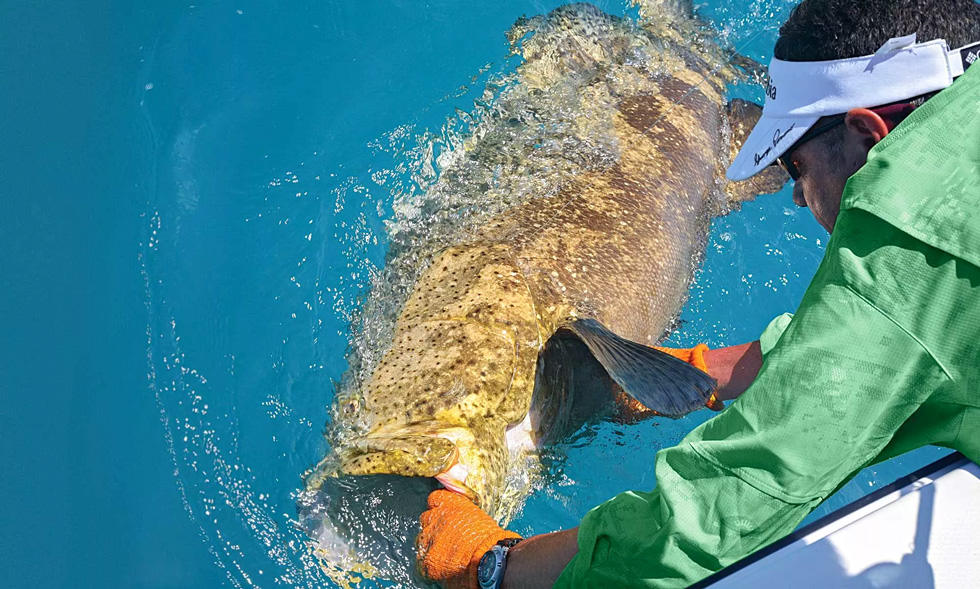 Anchored on a reef 40 miles from Key West, on the ­Atlantic side, Capt. Brad Nowicki and I had flag yellowtails fired up to the point of hitting topwater plugs. And just a few hours earlier, we kept our rods bent with muttons and grouper over shallow Gulf-side structures. Who would have guessed a major hurricane was going to hit the Florida Keys just two weeks later?

But prior to New Year’s, with the rebounding process in the Keys well underway, I fished for snook and tarpon around Key Largo, trolled for dolphin off the upper Keys, and chummed up Spanish mackerel in the backcountry behind Islamorada. In all three instances, the fishing was superb. And by most accounts, it still is.

Pelagics migrate and, with the lack of fishing pressure leading up to the storm and for weeks and months thereafter, they surely made it through the Keys without many casualties. But what about the bottomfish? Were their environments rocked badly? If not, has the lack of pressure bolstered their populations on the reefs and wrecks, and around sea fans, rocks and patches? Several Florida Keys captains shared their views on the local ­bottomfishing. 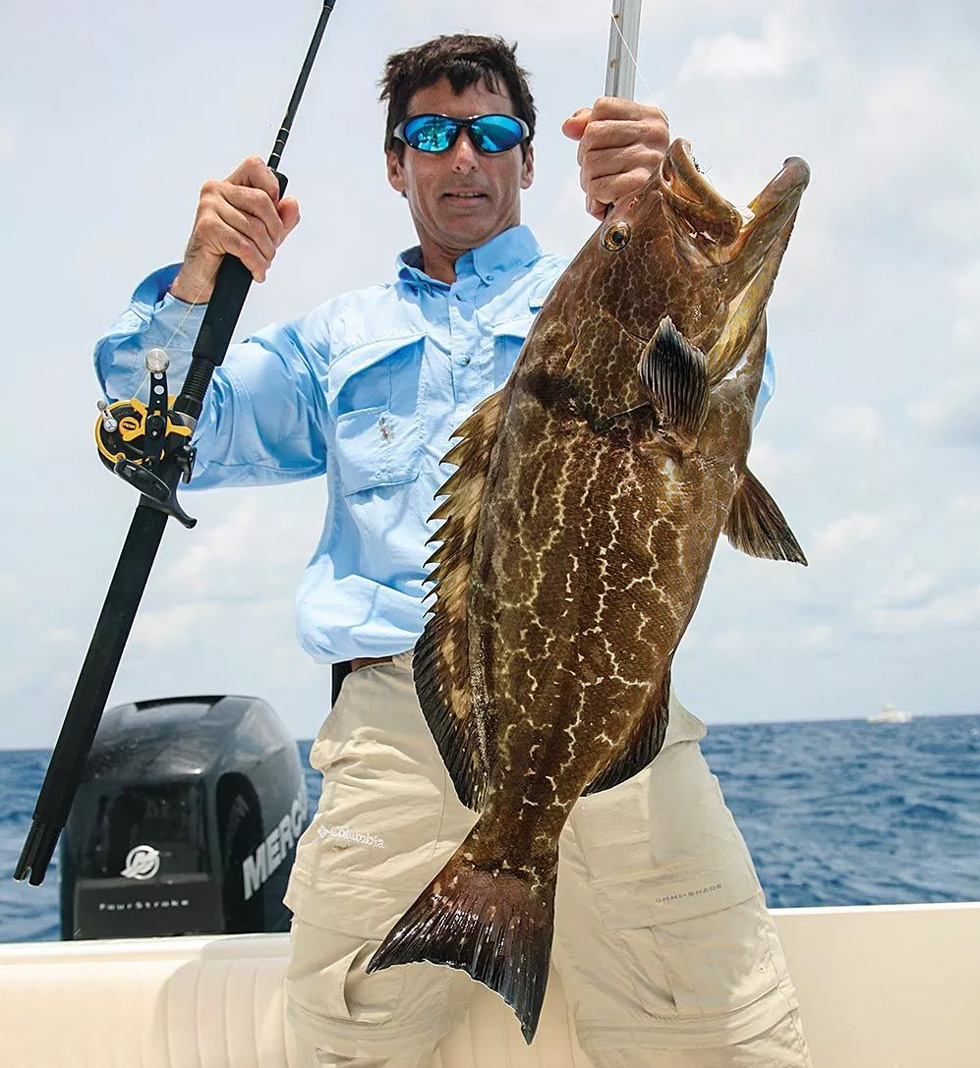 Black grouper, a prize catch, are a big attraction in many Keys reefs and wrecks.
George Poveromo
Key West

Capt. Brad Nowicki focuses his bottom efforts west of Key West, more specifically between Rebecca Shoal and the Tortugas, where options range from shallow rocks, shoals and ledges in the Gulf to rocks, reefs and wrecks on the Atlantic side. “In the Gulf, from the New Ground rocks and out west a ways, I’m seeing very few legal-size red grouper, and they’re the mainstay species here,” says Nowicki. “I’m not seeing mutton snapper like we should either. Something has changed in the Gulf. Yet the fishing on the Atlantic side is as good as it always has been, with lots of grouper, muttons, mangroves and yellowtails.

“Some divers told me the local Gulf rocks got beat hard and appear to have been scraped clean, but the sea fans still look healthy. Maybe some of the forage species for the grouper aren’t here? Maybe the grouper just ­haven’t migrated back yet? Time will tell for our ­Gulf-side bottomfishing.”

Capt. Mark Schmidt, a Key West and Marquesas bottomfishing pro, echoes Nowicki’s sentiments. “My first few trips in the Gulf resulted in zero red grouper,” says Schmidt. “But we caught some nice muttons from 8 to 15 pounds. Several trips later, the red grouper began showing up, though all were small. Ironically, lane snapper seem to have repopulated these spots in the absence of grouper. Now on the Atlantic structures, the fishing for yellowtails in particular has been on fire as of late.”

“It has been a bit of a reboot after the storm,” reports Capt. Andrew Tipler, who charters out of Cudjoe Key. “There’s a lot of sediment now between the reefs and ledges. Over the long haul, this can be good for our reefs, as the sediment serves as a base for coral. It’s a natural part of the ecosystem.

“For me, the reef- and bottomfishing has pretty much stayed productive. The big difference is that some of my prime bottom spots have been very slow, and some of my B and C spots that I haven’t fished in a while have been very good. My advice for those heading here to bottomfish is if the more popular spots aren’t producing, check out some old numbers, and move around a bit, looking for different structures. A lot of things have shifted along the bottom, but the fish are here; it’s a matter of finding out where they’re stationed.” 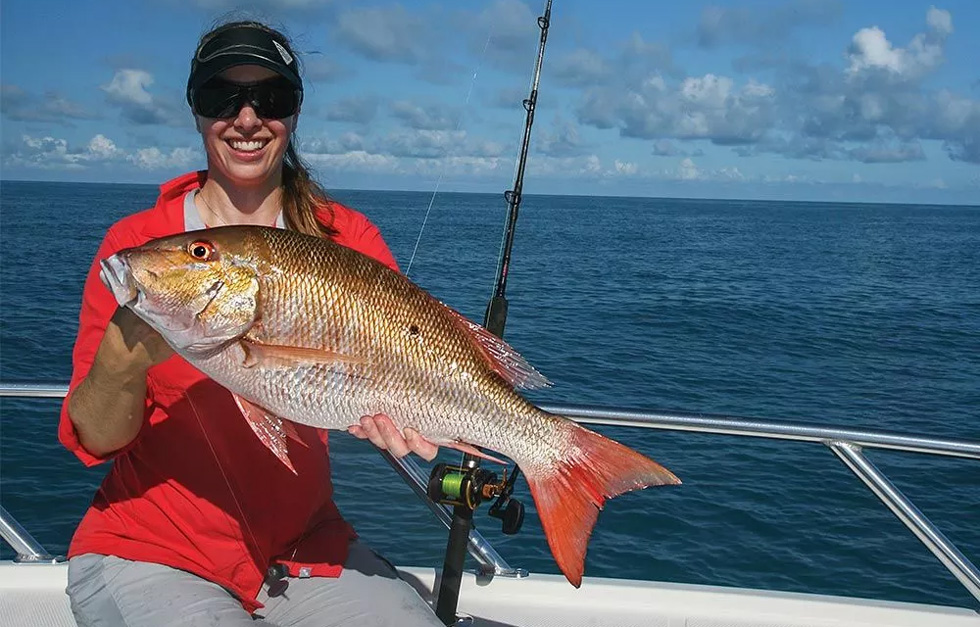 Irma broke up a few wrecks, but large muttons are hanging around the pieces.
George Poveromo
Marathon

Speaking of shifting bottom, Marathon’s Capt. Jimmy Gagliardini says a lot of the small Atlantic-side wrecks have been completely destroyed. “I figured I’ve lost close to 60 percent of the wrecks I fished,” says Gagliardini. “I really don’t think they moved but rather disintegrated from the storm pounding. But the ones still remaining have been wildly productive, especially for big muttons. And I can’t recall when we ever caught so many large muttons on the shallow patch reefs like we’ve been doing since the hurricane. Muttons, mangrove snapper, grouper — it has been crazy fishing for them along the patches.

“The lack of fishing ­pressure, especially off ­Marathon — which took a severe hit — really contributed to our excellent bottomfishing. I didn’t fish for two months after the storm, but my cousin Capt. Ariel Medero was out just two weeks after, and he tore up the bottomfish. The action remained exceptional through January. Now as more people are fishing here again, the fish populations seem to have stabilized. The bite is still great, just a little off from the crazy pace we had earlier.” 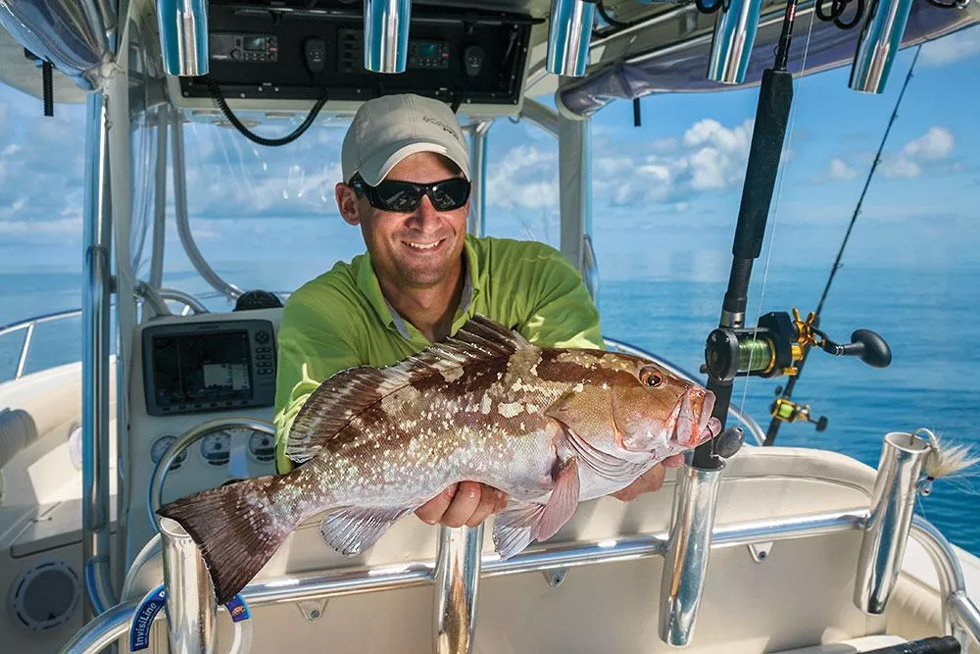 Red grouper took a little longer, but they have come back strong.
George Poveromo
Gulf Side

While fishing along the Atlantic side ranges from good to “off the charts,” it’s a bit of a different story in the Gulf, behind Marathon. “When I fish the Gulf now, it’s like I lost one of my legs,” says Gagliardini. “Most of my spots out here are gone. I’ll find a piece here and there, but it’s a totally different game now. I had spots I could run right up to and catch cobia, permit, mangrove snapper and some grouper. Now, not so much. It’s a lot more hunting for pieces and structures.

“Early on in the Gulf, there were huge sections of mangrove islands that had been ripped away by Irma, and they bogged down in about 10 feet of water. When we’d approach them, mangrove snapper would rise in bunches, and we’d catch them. They were like small reefs. But now those chunks are dead and no longer a factor.”

Capt. Shannon Attales, who operates War Bird out of Bud N’ Mary’s, says the storm has actually benefited the local bottomfishing. “A lot of already deteriorating old wrecks between 150 and 200 feet were really diminished after the storm,” says Attales. “What little sections of these wrecks were left are now spread out over a greater area. This depleted the fishing at first, but now more people are catching muttons and grouper, once they find pieces of these structures.”

Attales says the larger wrecks are still around, but the scattered bits of smaller ones have been good for people who don’t know the whereabouts or have the numbers to the better bottom spots, providing they stumble upon them. “Anglers kite-fishing and drifting for sailfish have noticed some of these structures on their sonar, and a lot of those who dropped on them have caught muttons and grouper. In the last two months, I’ve found close to 50 new bottom places, mostly small zones but with very good fishing. We catch muttons on them, even grouper.

“When I troll for wahoo, I stare at my bottom machine, and I’ve picked up 20 new bottom spots in this manner. My advice for other anglers is to do the same — watch the bottom machine when you’re trolling and drifting. As for the patches, some of the topography has changed, but the fishing is still good.” 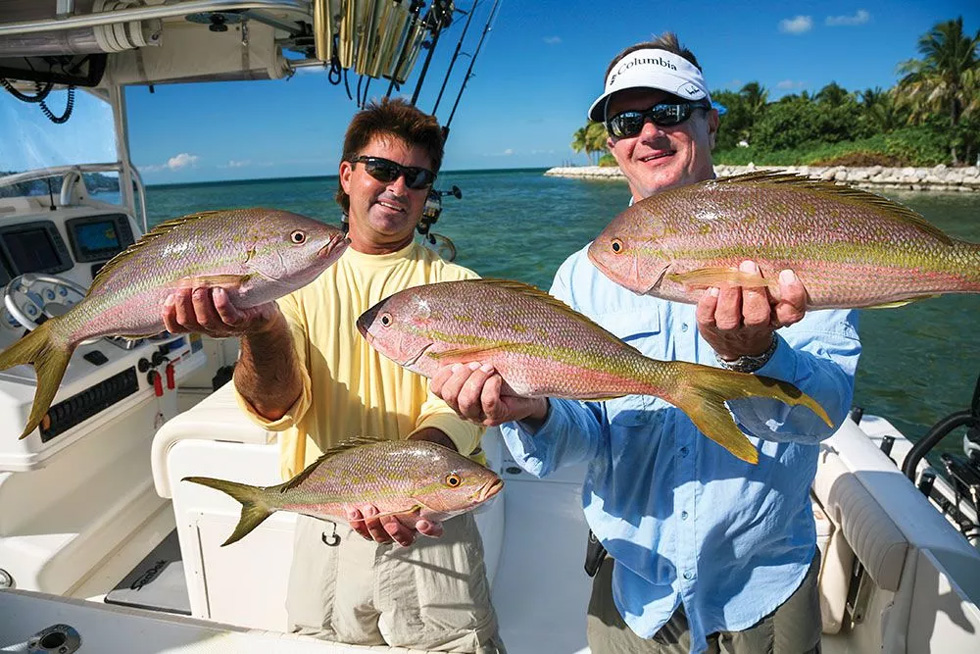 “I’ve noticed no big changes at all,” says Capt. Kevin Jeffries. “All the wrecks I fish are still intact and producing muttons and grouper. This includes the Elbow, the 212, the 280 and the 235. The ­natural reefs seem fine too.”

Jeffries also specializes in fishing northern Key Largo patch reefs, and he claims the action here also remains consistent. “I’m not sure it means anything, but these patches usually go off in ­October,” reports Jeffries. “This season, the fishing didn’t get hot until January. The muttons seem a little off, yet we’re seeing good ­numbers of keeper-size yellowtails and mangrove snapper. And despite a ­slowdown in the numbers of hogfish, the ones we’re catching are big. Things are pretty much normal around here. Any variation, I believe, is ­cyclical and not storm-related. I’d say the bottomfishing off the upper Keys remains very good.”

Capt. George Clark Jr. agrees with Jeffries. “I didn’t experience an upsurge nor a drop in fish,” says Clark. “Our reef-fishing has been as consistent as usual. All the wrecks I fish are still in place and holding fish. That being said, the gray (mangrove) snapper action has been excellent since the storm, and there’s no shortage of black grouper. And there have been numerous 10- to 15-pound muttons caught too. I can’t tell if all this is a result of the storm or just our typical bottomfishing off Key Largo.” Summary

In all, fishing in the ­Florida Keys has experienced a positive spike after Hurricane Irma. As mentioned earlier, pelagics have come and gone, and the fall run of dolphin passed through virtually untapped. Now, have those fish been caught elsewhere, or will the ­Florida Keys ­experience a push of larger fish this season? Time will tell.

As for the ­bottomfishing off most Florida Keys ­destinations, it doesn’t get much better. So hurry up and get down here!