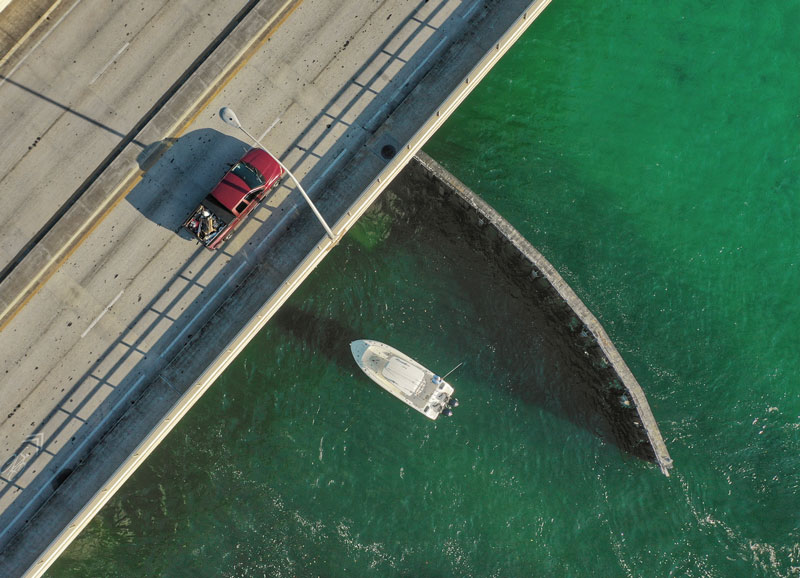 To catch more fish around bridges, think first in terms of proficiency; that is, where is it easiest for predators to capitalize on forage during various tidal stages? It's a solid strategy for all bridges, as no two spans and surrounding environments are alike. Then, there's the skill involved in effectively and safely fishing tight to pilings, groins and even sea walls, given strong tides, boat traffic and wind.

BASIC TARGETS - Pilings, stanchions and groins are major "visual" bridge spots (add shadow lines at night). Here, game fish typically stack down current and out of a full tidal flow, simultaneously ambushing bait and preserving energy. However, it's not all about the "down current".

During early tidal stages,when velocity is light, aggressive fish often hunt up current of structure. What's more, when moderate and strong tides strike a prominent structure, a wedge of calm water forms tight to it. These wedges, in turn, become limited ambush spots often occupied by larger, individual fish, Therefore, even when a tide progresses and fish retreat down current, these "wedges" are worthy of drifting a bait or bouncing a bucktail back to them.

360-DEGREE BONUSES - The first and last rows of in-line structures tight to deep inlet passages are subject to full brunt tidal flows, which create "washouts" or "ruts" along their down current sides and a second prime ambush spot on the same structure. During an opposing tide, fish lay within these ruts and feed, all while facing the current and conserving energy. These ruts also serves as ideal habitat for bottom dwellers the likes of fluke, spot, drum, snappers, groupers, etc., potential rod-benders when the more heralded game fish aren't around.

Pilings sandwiched between the lead rows are generally bolstered from full tidal forces and less likely to have ruts. The bottom line: identify these spots and don't limit your opportunities by fishing just one side during a tide.

LONG DISTANCE RELATIONSHIPS - Back eddies and tidal rips disorient and collect bait. The cushion of calmer water on the inside of an eddy and that along a rip are prime stalking zones. Again, game fish expend less energy here. Most eddies and rips form from tides washing through a bridge. However, based on an inlet's make up, these features may also occur well down current of a bridge, like where a strong tide deflects off a sea wall or washes over a shallow shelve or bar. If not within the immediate bridge realm, they're overlooked by far too many anglers. I can vouch for the snook, tarpon and big jack crevalles they've produced for me. What's more, they're great escapes from a crowded bridge.

GAVET AND THE BULL RING - Captain Gavet Tuttle fishes north Miami-Dade's Haulover Inlet, commonly referred to as the "Bull Ring". The velocity in which tides squeeze through this narrow and relatively shallow passage, boat traffic, and tight bridge confines make it difficult to navigate, let alone fish. However, its bridge is a magnet for snook, tarpon and, at times, big jacks, barracuda, snappers and groupers.

"Slack tide here is actually a good time to fish the bridge," says Gavet. "Fish are roaming about and it's easy to explore spots along both sides of the bridge and its stanchions. It takes less weight to place a bait in a strike zone and the actions of live baits and lures are less restricted. When the tide starts moving, fish begin feeding aggressively behind fenders, stanchions and bulkheads.

I prefer the first half-hour of an incoming or outgoing tide and fishing along the eddies on the backsides of these structures. There are some good bottom ruts here too, buffeted from the brunt of the current. I'll cast a live bait or pilchard-tipped bucktail up current and let it drift down through these zones."

When the tide becomes too tough for bait soaking, Gavet breaks out the deep divers and trolls through the inlet, concentrating on both groins and their closest stanchions. "Trolling is an easy way to fish Haulover and other smaller bridges," says Gavet.. "The plugs remain in the strike zone and you can pull them by most parts of the bridge. Snook, tarpon, jacks and big 'cudas love them."

BIGGER PLAYING FIELDS - The same basic fish holding features for "bull rings" apply to super bridges. Virginia Beach's Dr. Ken Neill III is an authority on fishing the Chesapeake Bay Bridge-Tunnel (CBBT). "We concentrate a lot on the up current side of the bridge for striped bass," says Ken. "As the tide progresses, teenager bass still feed into the current until it becomes overbearing. They'll then look for relief behind these pilings. However, the bigger, trophy class bass are lazy and more apt to hide in the lee to feed. To specifically try for them, one technique is to position the boat near the lee of a piling, stem the current to hold there and send down a live bait. It's precision fishing that's best saved for calmer tides and winds."

Like Gavet Tuttle's approach at Haulover, Ken goes on the troll when the tide becomes too overbearing to fish by other means. "We'll troll lures and swimming plugs for striped bass and parallel the up current pilings," says Ken. "It's tricky in that you want the lures to pass tight to the pilings, for the fish stationing behind them, yet not close enough to snag a piling. Given a strong tide and any wind, it can be challenging."

MOBILE BAY - Inshore and along the Dauphin Island Bridge, up current is generally favored for sea trout. And, many moons ago, it was here, on the incoming, where I caught a seven-pounder with the late Pete Melech.

Mobile Bay's Captain Patrick Garmeson targets them up current of pilings and by floating back live shrimp and croakers. "I'll make micro-adjustments on the floats to find the precise depth these fish are feeding at," says Garmeson. "We'll start close to bottom and work our way up. Trout most definitely are more up current of pilings and bottom structure. They'll aggressively move about to locate food, compared to redfish and especially flounder. A lot of redfish here are caught on the backside of pilings, hunkered down out of the flow and feeding on bait washing by."

"My preferred tides are along the change. The flow is easy enough to thoroughly explore the pilings. However, when the tide grows stronger, even trout retreat down current for relief. My trolling motor is crucial for this type of fishing. With it, I can quickly rule out areas with no fish, and then remain in position to drift baits back to the pilings when we do find them."

SKILL SETS - Precision and safety go hand-in-hand for bridge fishing. Gavet Tuttle highly recommends assigning one person to the wheel, and one on the rod. "Holding a boat tight to a piling or eddy requires common sense and the skillful use of throttles and steering," says Gavet. "Catch the edge of an eddy or rip, and the boat can instantly get sideways, or even into a worse predicament. I don't suggest fishing bridges by yourself, especially Haulover. But if you do, a GPS trolling motor could be a major asset."

Team work goes beyond holding a boat in a tight spot. Upon hooking up, a helmsman should assist the angler by motoring away from the structure and, if necessary, out into open water. Remaining stationary isn't an option; a fish will charge into the structure and break off.

It's no different when trolling; hook up underneath a bridge and the helmsman best keep the boat moving forward until the span is completely cleared. Or, if paralleling a bridge, make a 90-degree turn out into open water.

Plugs are too expensive to donate to groins and pilings, and most of us know all too well the hell'uva sting of losing a big fish with it.