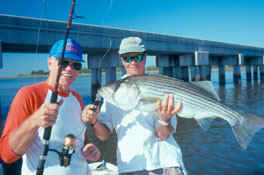 Live-baiting is one of the quickest and most effective methods of fishing, both inshore and off. Even the best-designed lures and the freshest, most expertly rigged dead baits can’t imitate the action, flash and scent of a frisky live bait. And that’s why many hard-core fishermen make the effort to catch their baits in advance or purchase them at premium prices when the bite is on.

Among the key requirements for successful live-bait fishing is acquiring fresh baits, which are more energetic and tend to live longer than penned-up ones. You also have to know when to replace those baits. Even though a tired bait may appear perfectly fine to the untrained eye, experienced live-baiters can recognize the slightest signs of bait fatigue. They know that the extra action of a fresh, healthy bait can make a big difference.

To help maintain this edge, a growing number of serious live-baiters have been “supercharging” their baits by injecting pure, compressed oxygen into the live-well water. Doing so allows them to keep their baits alive longer, as well as “recharge” the tired ones to where they’ll swim like they’re on steroids.

Oxygen Edge is a commercial oxygen-injection system that was designed to help transport and stockpile large amounts of live bait and small game fish. Capable of delivering a continuous supply of oxygen, it helps maintain the health and energy levels of live bait in even the hottest, saltiest marine environments. By dialing in the precise amount of pure oxygen being introduced to the water, anglers can keep their baits frisky for several days. The system has proven so effective for some live-bait tournament fishermen that they’ve been trying to keep it under wraps for fear of the competition finding out!

It’s important to note that Oxygen Edge is not an aeration system that simply pumps air into the live well, or a flow-through system that is limited by the amount of oxygen contained in the water. Rather, the Oxygen Edge system injects pure welder’s oxygen into the well water. Consisting of a small, lightweight portable-aluminum oxygen tank, a solid-brass regulator, special tubing, and a specially developed diffuser stone that’s lowered into the live well, the Oxygen Edge system can treat up to 200 pounds of baitfish. It’s a very simple and economical system, since oxygen refills cost about 75 cents. The Oxygen Edge systems retail for between $364 and $566, with custom and dual versions available.

To understand the advantages of the oxygen-injection system, you must first consider that the air we breathe is composed mostly of nitrogen (approximately 79 percent) and oxygen (roughly 21 percent). Therefore, a traditional aerator only delivers about 21-percent oxygen into the live-well water. When baitfish are initially captured and transferred to a live well, their stress level skyrockets. In severe cases, they deplete most of the available dissolved oxygen provided by these standard aerators. Depending on the type and quantity of fish in the live well and other stress-inducing factors — such as injury, overcrowding, long runs to the fishing grounds, and warm water temperatures — excess oxygen consumption could kill the baits or make them lethargic.

Doubling the amount of air or water flowing through the live well with multiple aerators or pumps will not significantly increase the dissolved oxygen content much beyond the 21 percent that’s available in air. In some cases, excess water flow will force the baits to swim harder and consume even more oxygen.

By comparison, injecting 100-percent pure oxygen into the live well can push the dissolved oxygen content beyond supersaturation concentrations. That’s something mechanical water pumps and aerators can’t do. And since the oxygen consumed by the baitfish can be sustained and replenished at supersaturation levels, gone are the concerns over oxygen deprivation arising from increased respiration, warm water, overcrowding and extended confinement.

High concentrations of dissolved oxygen can be toxic when used for extended periods of time. Therefore, the Oxygen Edge system comes with a chart to determine the proper dosage based on the basal metabolism and poundage of the baitfish in the well. Once this is determined, the user simply dials in the proper number on the regulator dial.

Since catching and transferring bait generates high levels of stress and oxygen consumption, the live well should be supersaturated with oxygen before the baits are introduced. The additional oxygen will meet the respiration demands caused by capture and transport stress and keep the baits healthy.

This past summer I got to see the Oxygen Edge system in action when I fished for striped bass around New Jersey’s Shrewsbury Rocks with Captain Terry Sullivan. A leading Point Pleasant-based guide, Sullivan had filled his live wells with herring that he had captured in the Delaware River and stockpiled in his New Jersey pens. Since the baits had been penned for about three weeks prior to my arrival, they grew increasingly weary in the boat’s live well, even though it was being supplied with raw water. Around mid-day, Sullivan broke out the Oxygen Edge system, lowered the diffuser stone to the bottom of his live well, dialed in the appropriate dosage on the regulator and began injecting compressed oxygen into the well water.

The system was eerily quiet, and produced surprisingly few bubbles. However, within several minutes the tired herring began acting like they had each downed a pot of coffee! We placed them on our hooks, cast them out and caught several nice bass. We repeated the tactic the next day with similar results. There was a marked difference between the stressed and tired herring we took out each morning and the mid-morning, supercharged versions.

“The penned herring get weak and tired after a while,” says Terry. “So I supercharge them while I’m fishing. Depending on their stamina, I can perk them up with different dosages of oxygen. With weak baits, I’ll leave the system on throughout the day. I’ll use it for bunker (menhaden) as well, especially when the water’s real warm and the baits in the well start dying off.

“I also use it when I’m transporting bait in my truck, after catching them in the river. The system keeps them in good shape until they’re unloaded in my bait pens back home. The pressure change at the diffusing stone cools the water by a degree or two and keeps the bait from stressing. We don’t use a pump in the truck’s well, just pure oxygen injection and a few additives to control ammonia buildup. Between transporting bait and supercharging the ones I take fishing, it’s a big help. It’s also very efficient. I can go the whole season on $15 worth of compressed oxygen. It’s cool stuff.”

Safety issues are paramount when using pure oxygen. Since electricity can be a source of ignition and fire, pure oxygen should never be routed through the port of any electrically operated aerator or bait-well pump. Doing so could cause a fire if the pump has not been certified for use in an oxygen-enriched environment. Furthermore, the oxygen tank or its supply tubing should not be routed, stored or secured adjacent to or close to electrical wiring, switches, batteries, in the bilge, or near petroleum-based products. Furthermore, the oxygen tank must be secured with straps or brackets. It should also be removed from the boat after each trip, cleaned and carefully inspected.

Given the positive reports from those anglers who are currently supercharging their baits for striped bass and king mackerel, as well as those who use the system for keeping tournament fish alive until they’re weighed in and released, the Oxygen Edge system definitely has its merits. If you do a lot of serious live-baiting and are looking for every possible advantage, this system might be right up your alley.