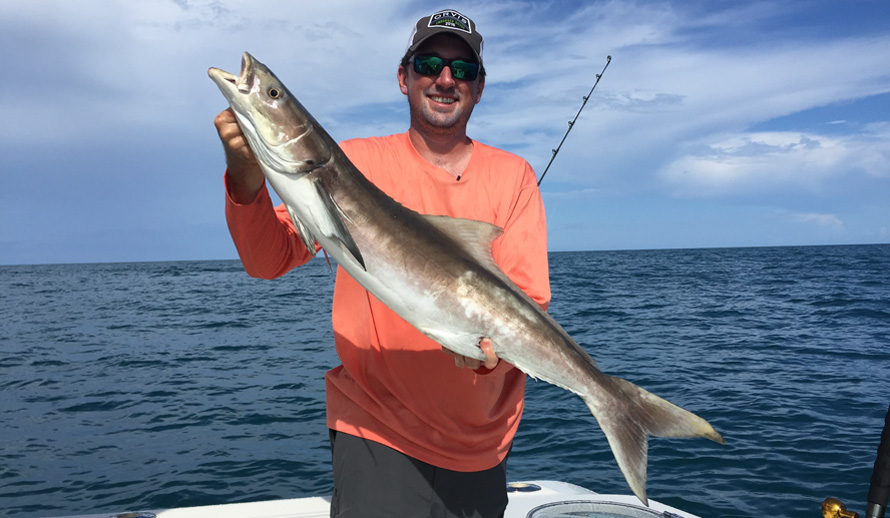 Editor's Note: On the morning of September 10, Hurricane Irma made landfall on Cudjoe Key as a Category 4 storm, with sustained winds of 130 mph. Damage throughout the Florida Keys was widespread, but many were spared. At press time, the middle Keys, where Cudjoe is located, were getting back on their feet, and the Keys were officially opened to visitors on October 1. While services were still spotty, the situation has been improving by the week. The fish fared well and were exhibiting typical post-hurricane behavior: The bite is on for those able to get out and take advantage of it.

Capt. Andrew Tipler knows these waters well. We spent a particular outing in the Gulf, with hopes of scoring cobia and permit. Cobia are prominent on the wrecks between spring and summer. Being there a bit past their prime, our outing also proved they can pop up any time during the year; we battled 10 cobia over a day and a half. As for permit, look to spring through early summer for the best odds, though some large resident fish remain year-round.

“Precision anchoring is essential to my style of ‘tier’ fishing a wreck,” says Tipler. “A claw-style anchor bites best in the soft silt and rock bottom. It sometimes takes several attempts to anchor perfectly, so keep at it,” he says. 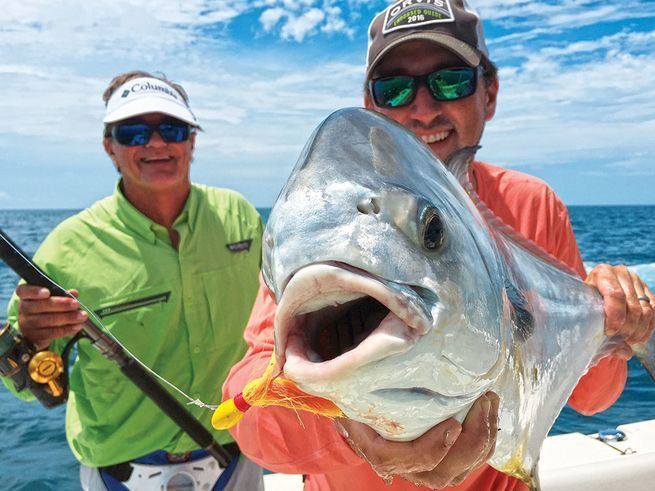 We had my MARC VI holding 50 feet uptide of the superstructure of the Gunvor wreck, in 60 feet of water; close enough to draw fish within casting range, but far enough to prevent them from returning to the wreck.

Other wrecks within striking range of Cudjoe anglers are the Bosilika, Luckenbach and Sturtevent. According to Tipler, there are also assorted debris fields, dumpsters and even springs ­nearby that hold fish.

Tipler uses a tier approach at the wrecks, to cover the entire water column. For cobia, we baited with live pinfish on 6/0 in-line circle hooks (through the lower and upper jaws). The bottom outfits, Penn Fathom 15 lever-drag reels with 50-pound braid, were rigged with an egg sinker resting on the barrel swivel of 6-foot, 50-pound fluorocarbon leaders. Another pinfish was free-lined on a 20-pound-class spinner. Reserved for goliath grouper was a Torque 25NLD with 80-pound braid, 130-pound-test fluoro leader and a 12/0, 3X strong in-line circle hook.

For permit, he impaled a live crab on a bucktail, fished on bottom from a spinner with 30-pound braid and 30-pound fluoro leader, and free-lined another crab back on a 4/0 in-line circle hook.

When the tide slowed, we deployed frozen menhaden chum, and within minutes big mangrove snapper rose into the slick. We caught them on live baits and knocker rigs on the bottom, as well as free-lining small pieces of bonito, ballyhoo and Spanish sardine with the chum flow on 12-pound fluoro leaders and 1/0 in-line circle hooks. 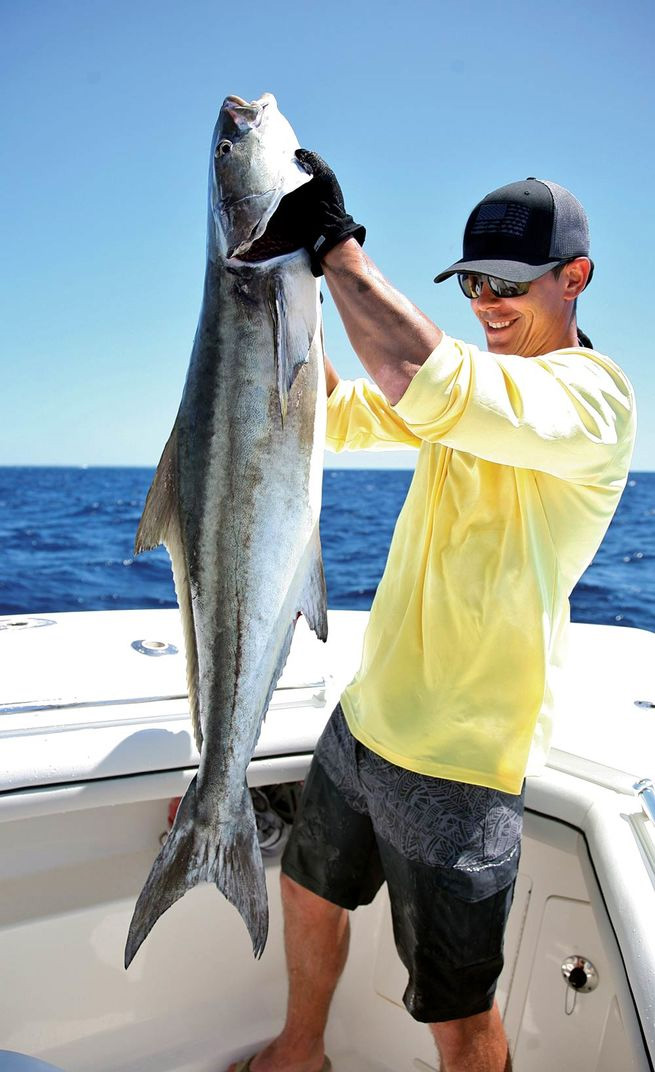 Close Neighbors: Cobia patrol the same habitat as the permit.

“If you’re getting shots at the fish you want, stick it out,” advises Tipler. “There will be lulls, especially with permit and cobia. Give permit ample time to circle back toward the wreck — which they should, if they’re around — and for another pod of cobia to push through. Stay for at least a full tide change. When it changes, the fishing may improve.”

A couple of seasons back, Capt. Beau Woods and I dropped anchor on a reef where these fish congregated. The mangroves were so thick under our boat that, in 60 feet of water, my Simrad showed a false bottom reading on the snapper at 30 feet. 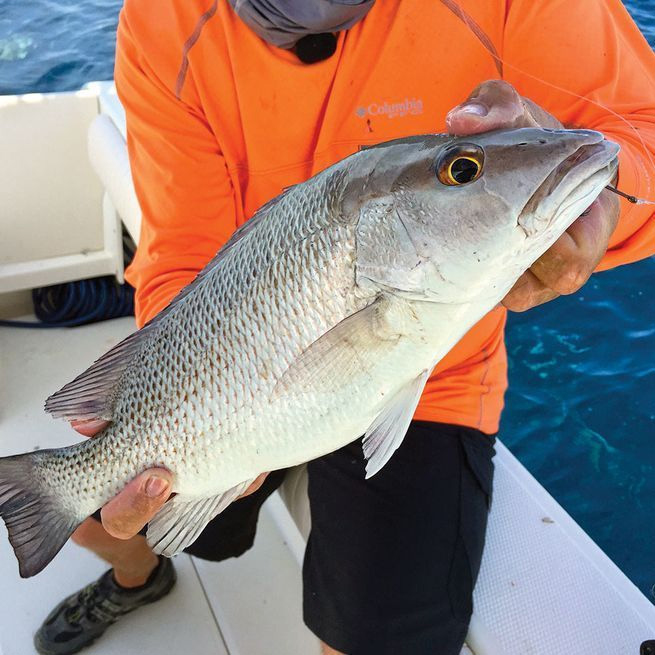 Snap 'Em Up: Mangrove snapper congregate over Atlantic reefs to spawn in June.

Our frozen menhaden chum exacerbated the wild scenario. The water behind the boat turned copper with mangroves eating chum right out of the mesh bag.

Snapper, usually wary, didn’t care about our 30-pound fluoro leaders. Larger fish fell victim to live pinfish on knocker rigs. “You can catch all the 12- to 15-inch fish you want on smaller baits, but large live baits — and I mean pinfish the size of your palm — get the big ones,” he says.

Woods explains: “When the canals and creeks seem devoid of spawning-size mangroves, that means they’re on these contours — sharp elevations, hangs and reefs with 5 to 10 feet of relief between 30 and 100 feet. I’ve found that they start feeding between three days and a week after they’ve migrated out here.

At press time, Cudjoe Key was recovering from Hurricane Irma, which struck in September. Some of the facilities were operating, and some were still in the recovery process. Both Tipler and Woods were up and running and eager to accept bookings. Cudjoe Gardens Marina was recovered and scheduled to open the first week in October. Currently, anglers find complete accommodations in the nearby Key West area, but things are improving weekly. For the latest availability of accommodations, call the establishment or contact the Lower Keys Chamber of Commerce at 305-872-2411.

Mixed Bag: Access to Gulf and Atlantic waters allows for a varietal day of fishing.

Leaders: 15 feet of 20- or 30-pound fluorocarbon top shot. Increase to 40- or 50-pound when dropping big baits to muscle larger mangroves out of the bottom and away from sharks. Drop to 15- or 12-pound if bites are scarce.
Hooks: VMC Coastal Black in-line circle hooks, 1/0 and 2/0 for free-lining, 3/0 and 4/0 for knocker rigs
Baits: Small bonito chunks, ballyhoo strips or squid slivers for free-lining; live pinfish, medium-size bonito chunks and ballyhoo sections for knocker rigs 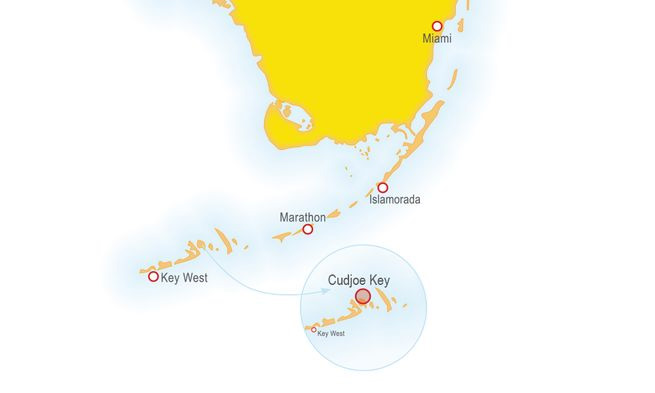 Easy Access
Cudjoe occupies an advantageous location for accessing the Gulf. From the Atlantic side, and based on boat size, you can traverse Kemp Channel, lowering outriggers and removing the rods from the T-top to clear the bridge. Pine and Bow channels are the shallower, more challenging passages. Niles Channel is a bit deeper and another solid option. However, if you’re not intimately familiar with these passages, consult a navigational chart before attempting such a run.