Bountiful Waters Surround The Gateway To The Florida Keys 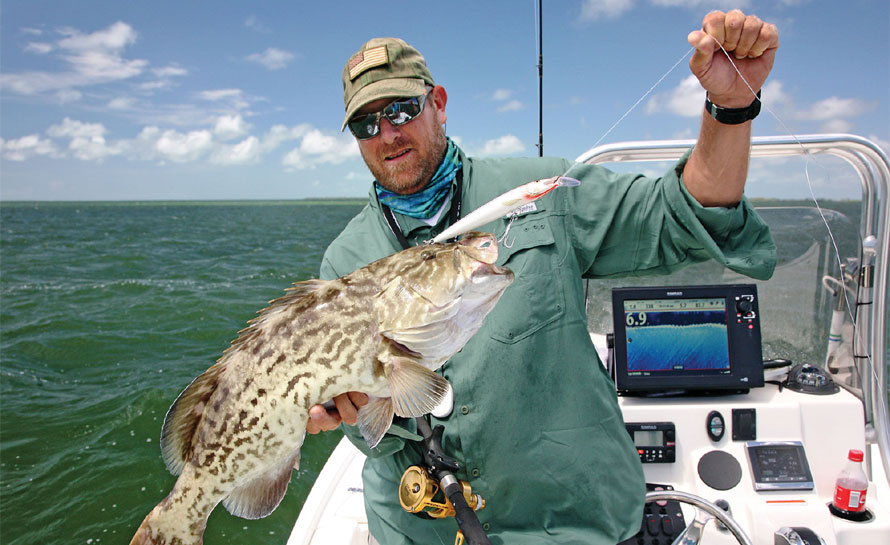 “Something nailed the lure but missed the hooks!”exclaimed Capt. George Clark Jr. “Did it feel like a grouper?” I asked. My cohort’s reply was an ­unexpected “Hooked up!” We were trolling big swimming plugs through Key Largo’s Barnes and Card sounds, experimenting with an alternative to the live-baiting Clark does here for gag grouper. Within 10 minutes, we discovered that dragging diving plugs is deadly in these waters too.

While my Shallow-Water Marc continued forward slowly, Clark kept the grouper from powering back to its lair. Minutes later, he lifted a husky gag into the boat. We devoted another hour to trolling, losing all but the head of the next grouper to an aggressive shark, and ­another when the line ­parted on the channel edge after we were forced to avoid a collision with a large yacht that totally ignored our small boat. One thing is for sure: This area isn’t boring.

No Shortage of Choices

I’ve fished with Clark and other notable Key Largo backcountry pros, like Capt. Tony DelosSantos, on several occasions. Both Clark and DelosSantos frequently travel deep into Florida Bay, often to far Gulfside estuaries, yet neither has any trouble bending rods with quality fish around Key Largo proper. Granted, it’s a scenic cruise into the ­Everglades, but why travel 35 to 50 miles each way when you usually do just as well or better closer to home, with a stop for lunch at Sundowners Key Largo or the famous Alabama Jacks?

Key Largo is known for yielding large numbers of small trout, most under a pound. However, several years ago I learned that big ones thrive here too. During a trip with DelosSantos, I netted a 5-pounder for him while drifting live pilchards back with the tide into a creek. He explained the big trout gather in the creeks for their spring spawn. “Last year, the spawn was in Jewfish Creek, this year in Trout Creek,” DelosSantos said. “I look for structure in the creeks and other spots where baitfish move in and out. Dirty water is good too; it makes it easier to fool bigger fish,” he explained. 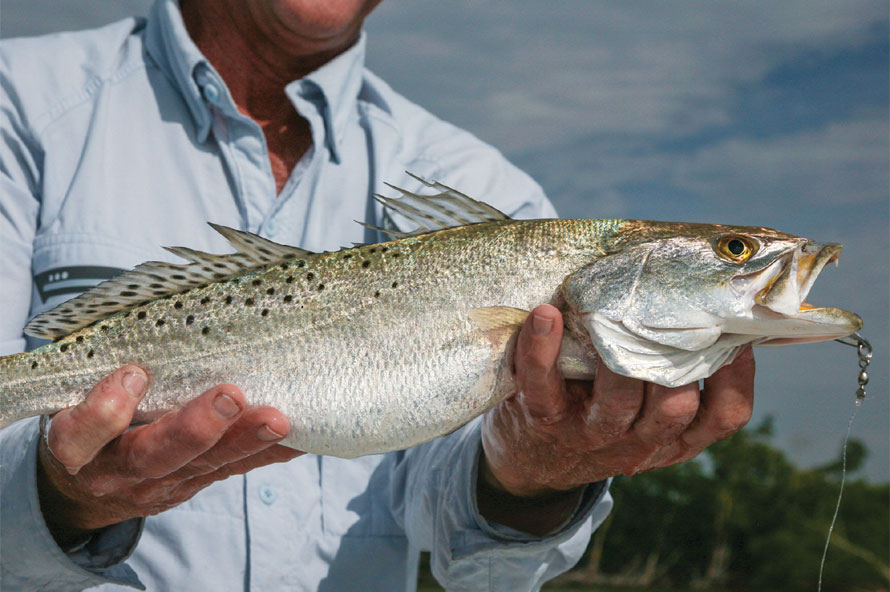 With minimal tide ­movement, DelosSantos free-lines live pilchards and mojarras in these creeks, adding a split shot as the tide picks up, and often culminating with a knocker rig at full flow. He prefers 20-pound fluorocarbon leader in clear water and 30-pound in cloudy water, with 1/0 to 3/0 in-line, light-wire circle hooks, based on the size of the bait. “One good trick: If the bite on the free-lined baits ceases, switch to a popping-cork rig,” DelosSantos says. “I set the float to hold the bait halfway to the bottom. That and the popping noise of the cork usually get the trout going again. When that slows, we go back to free-lining.”

In the shallows, school trout forage along sea ­grasses and in sand holes. They devour live pilchards, finger mullet and small ­pinfish ­either free-lined or suspended beneath a popping/rattle float, but artificials are also productive. Topwater plugs are best early in the morning, and swimming plugs keep the bite going as the sun rises higher.

Soft-plastic grubs, shrimp and baitfish imitations are also consistent. “Look for muds around islands and over grasses. Those are feeding trout,” DelosSantos says. “Shut the outboard and use a trolling motor to ease into casting range. If they’re not aware of the boat, you can catch a bunch.” 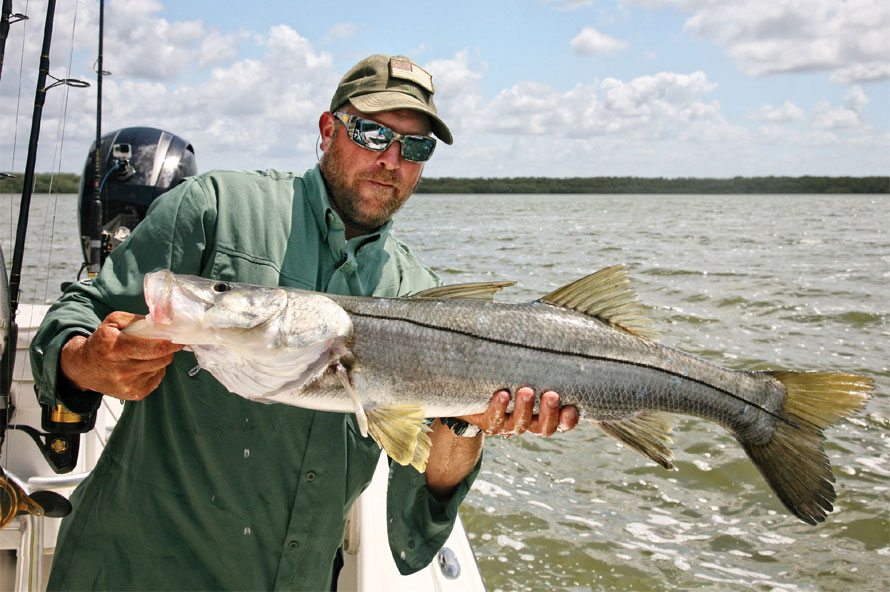 The network of islands and creeks behind Key Largo and extending through its northernmost sounds holds plenty of snook. “At times, I catch snook just 3 miles from my dock,” Clark says. “From summer through fall, before the cold fronts arrive, snook hang around anything that flows into the ICW. I often hit creeks feeding off Joe Bay, like Trout and Mud, as well as those around Long Sound. But Key Largo is practically surrounded by good snook spots.” 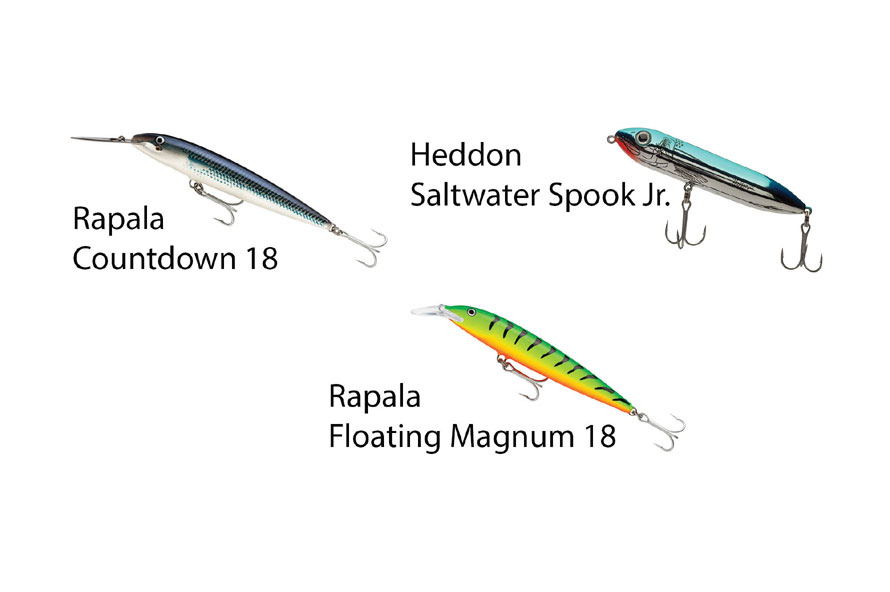 Though not practiced as often, plug-trolling remains another deadly tactic to catch snook here after sundown. Jewfish Creek offers a good trolling spot, and the Marvin D. Adams Waterway is another. Deep-diving plugs, such as Rapala’s CountDown 18, get the nod in deeper channels and around deeper, lighted bridges, while short-lipped, shallow-running plugs, like the Floating Magnum 18, perform best along lighted docks and shallower channels.

Rig trolling plugs with 60-pound fluorocarbon leaders. As when trolling for grouper, drop the plug back until it bumps bottom, then reel up a few cranks. Hold the rod downward (tip pointed at the water), watch the sonar for obstructions that may require lifting the plug, and troll along the deep sides of channels, past bridge groins and channel mouths. Between snook strikes, expect encounters with jack crevalle, tarpon and, perhaps, gag grouper. 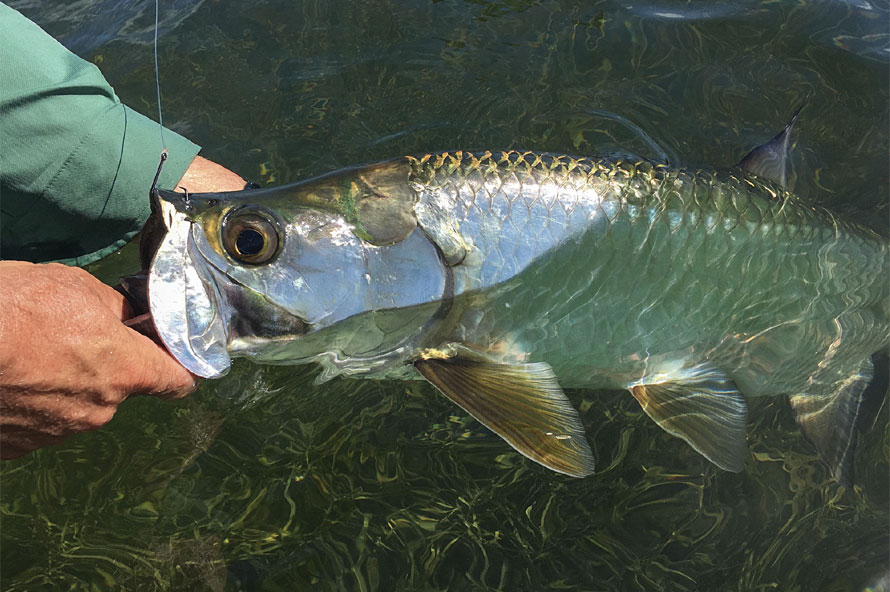 Tarpon abound in March and April, especially along oceanside flats, with some bigger ones lingering around the bridges a bit after that. A brief but sometimes explosive second tarpon run materializes between September and October with the finger mullet migration. The shallows and mangrove islands throughout Barnes and Card sounds, and well north to Caesar Creek and Elliott Key, also hold fair concentrations of juvenile tarpon.

On one outing with Clark, we spotted three juvenile tarpon milling tight to a mangrove island on a high tide. Clark pitched a live pilchard three times before he found a player and was rewarded by a gallant, acrobatic fight in less than 3 feet of water. The same tackle and baits, including soft plastics outlined for snook, are ideal for ­smaller tarpon. For large fish, step up to a heavier 20- or 30-pound-class outfit, 80-pound fluorocarbon leader and a 6/0 in-line ­circle hook, baited with a live crab, large pilchard, mullet or pinfish. Redfish Too

As summer transitions into fall, August, September and October specifically, fishing for redfish heats up closer to Key Largo. Reds then cruise the flats and mangrove shorelines, becoming great sight-fishing targets. Some of the very points that hold snook (i.e., creek mouths and bends, submerged structure and deep undercut mangroves) also hold redfish when water ­temperatures drop. Even better, the same tackle works on reds; just make sure the baits remain near the bottom during cooler weather. 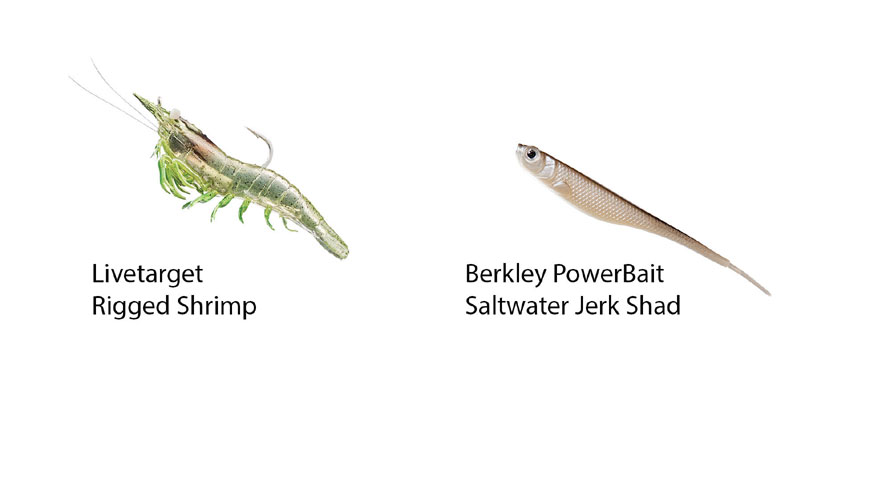 Concentrations of gag grouper move inshore during the cooler months, especially during February and March. Not unlike snook, they favor deeply channeled mangrove networks with good tidal flow, and they readily take live pilchards and pinfish pitched underneath. If you don’t snag mangroves occasionally, you’re not fishing tight enough. DelosSantos has a solid handle on catching skinny-water gags, and we shot a TV show episode on this a few years back.

We scored a number of grouper approaching 10 pounds with stout tackle, braided lines, leaders no lighter than 50-pound-test, and 2X Strong, 3/0 in-line circle hooks. Basically, either you muscle a grouper out of the mangroves with a nearly locked-down drag, or it’ll break you off in the roots.

As mentioned earlier, when the gags are in, they also frequent deeper channels and passages, where live-baiting and trolled swimming plugs do the trick. Look for uneven or protruding edges along the deep side of a channel, with small ledges, depressions or scattered rocks along the bottom, all of which offer prime ambush stations for these grouper. 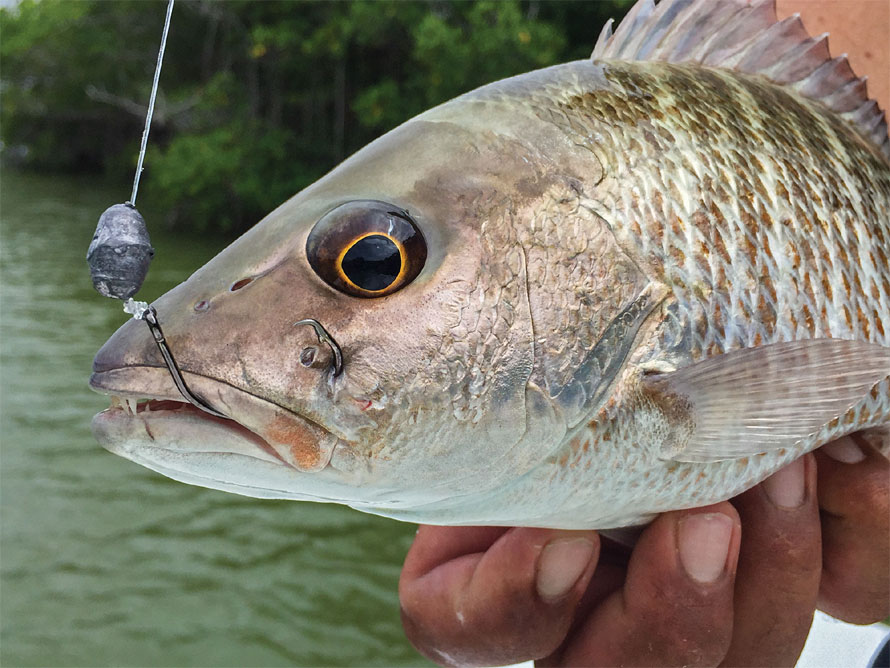 Count on mangrove snapper and jack crevalle to ­intercept live baits at any given time. DelosSantos ­often targets mangrove snapper, an endeavor for which he prefers creeks with good water flow and marginal clarity. “We catch plenty of mangroves in that 11- to 17-inch range,” he says.

“My favorite bait, though they don’t last long, is a small, live mojarra. They are shiny, can’t outrun a mangrove, and just get devoured. As odd as it may seem, this past year we’ve been doing very well using frozen shrimp. Again, go light to fool these keen-eyed fish; for best results, drop back to 20-pound-test leader and a 1/0 light-wire circle hook.”

Jacks pushing 10 pounds are possible year-round, but 20- to 30-pounders show up during the spring. Clark says the big boys mostly traverse the ICW, the ­Jewfish Creek and Card Sound bridges, and Angelfish and Broad creeks. They’re easily chummed into a frenzy with live pilchards and will annihilate a live bait or topwater plug cast their way. 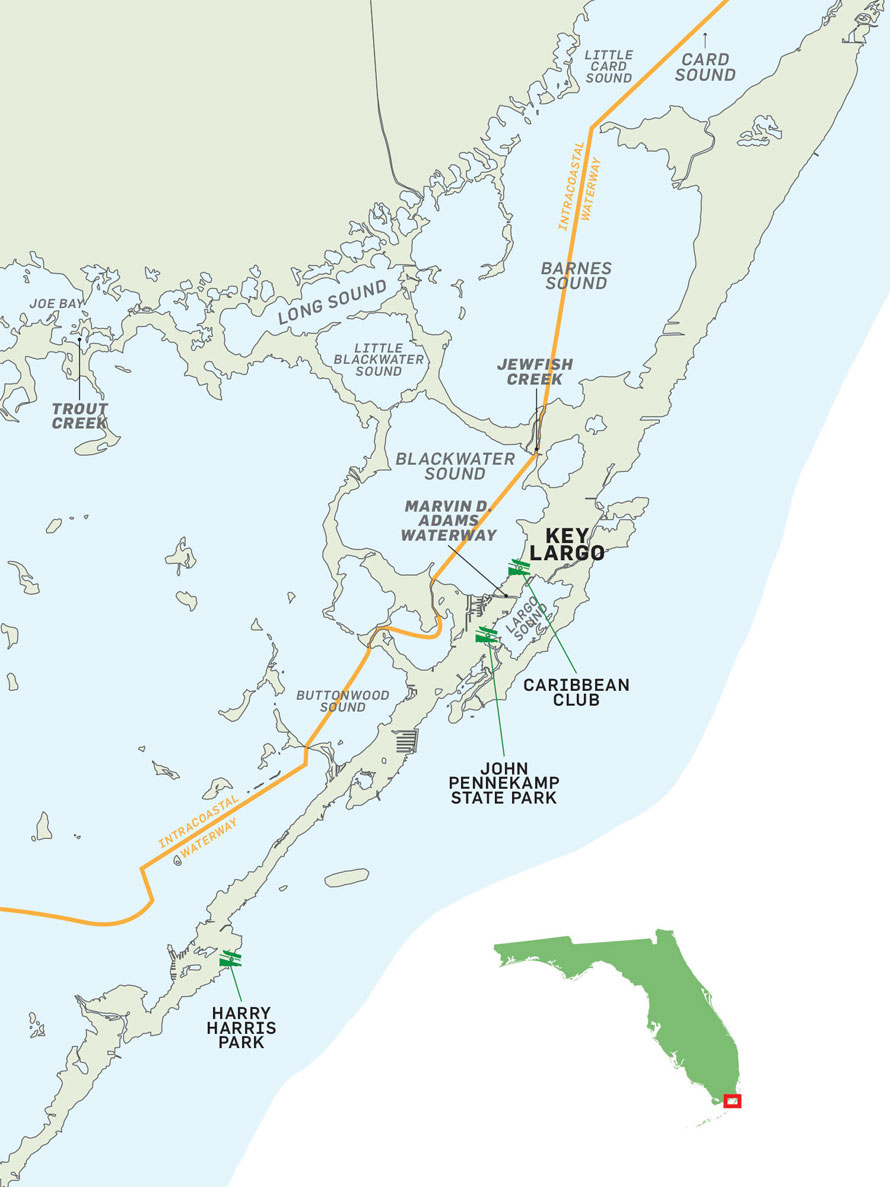