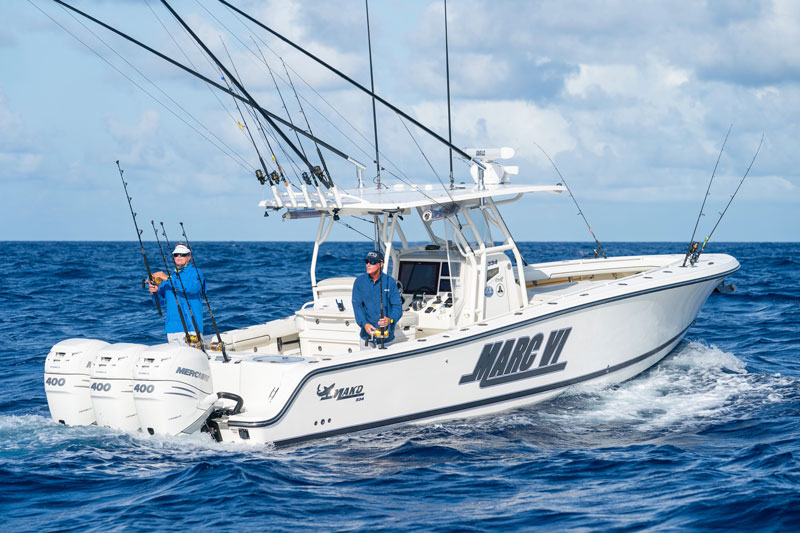 There are numerous methods of targeting specific offshore game fish, each serving as a unique foundation upon which to build success. However, any notable achievements are usually contingent upon the subtle tweaks and often aggressive modifications above and beyond those basic foundations, especially when conditions turn challenging or feeding activity ceases.

For general offshore trolling, I've outlined five of my most crucial parameters. These are strictly for the mechanics of offshore trolling and not the skills required to decipher ocean environments and conditions to locate fish.

REALISTIC ILLUSIONS - Potent trolling spreads unleash fish-attracting surface commotions and illusions of displaced forage scurrying for survival. Offshore pelagics can sometimes be coaxed up to a boat and  thre white water behind it. However, if the fleeing forage illusion falls short, they’ll likely fade away. This is a true art.

Most of my baits are positioned in clean water and in a staggered formation; the latter to isolate each bait for easy pickings.  A pair of 20-foot Carbon Fiber outriggers spread their baits – and any teasers –  well off to the sides of the boat and over clean water. Center rigger bait excluded, these outrigger offerings are the farthest placements in the spread. If “short” outrigger baits are deployed, they’re often skipping or swimming in clean blue water outside the prop wash, and generally behind any teasers. These baits represent the closest in the spread.

"Dirty" water does have merit, however. I firmly believe prop wash appears as a "feeding frenzy”. Therefore, I’ll position port and starboard flat lines around this agitation; one bait rides where the prop wash dissolves into clean blue water, the other about 20- to 40 feet beyond that.  With deep diving swimming plugs, a MAG “40” diver is positioned in the wash, where it tracks near the bottom of the commotion, whereas a MAG “30” swims in the clean water behind the wash.

SPEED DIALING – Trolling speeds are crucial in generating strikes; there's no "magical" velocity number for success.  My “optimum” trolling speed is when the baits are doing exactly what they’re supposed to be doing. That is, skipping baits should barely break the surface – not greyhound across it, and swimming baits should perform just under the surface.  It'll take some positioning and throttle adjustments to hit the right illusion, but, once there, that's the perfect speed to base your efforts upon.

If strikes are slow in coming,  experiment with trolling speeds.  Many believe picking up the pace is the solution, as doing so covers more territory and changes up bait actions. Off center trolling (tight zig zag patterns) also enhances bait actions.

Conversely, slowing the pace also works, even when skipping baits are floundering under the surface.  Slowing down to a few miles per hour has helped us score dolphin, tuna, billfish, king mackerel and even grouper near shallow reefs.  Expounding even more, we often employ the “sink and swim”. That is, shifting into neutral, letting the baits sink for about a minute, and then immediately reacquiring trolling speed.  Remember, it’s all about the illusion.

The trail feature on my sonar’s mapping page reveals exactly where my boat is in relationship to bottom structure, how much real estate is truly being covered and much more.  If I had one dollar for every time I've lent my ear to anglers experiencing unsuccessful dolphin outings, I'd be the owner and publisher of Salt Water Sportsman magazine!  Among the unsuccessful trollers, the usual theme centers on how they towed baits in a southerly fashion for a large part of the day.  Given the north-flowing Gulf Stream averaging two- to four- mph, simple math shows that little ground is covered by trolling directly into the Stream flowing between five- and eight mph.  Water volume is indeed covered, but not hard bottom.  In this situation, a trail feature would reveal this lack of bottom coverage, and that by deviating in a more easterly to westerly fashion would result in better structure coverage.

HOOKING UP – One of the biggest trolling mistakes is slowing considerably or shifting into neutral upon hooking up. Monofilament lines have an inherent stretch of up to 25-percent of their respective breaking strengths. To alleviate much of this stretch and increase solid hook sets, keep the boat moving forward and at the same trolling speed for at least 30-seconds. Do not “gun” the boat in drag-racer fashion to set hooks; it'll likely knock folks off balance and ruin the rhythm of the bait spread. Maintaining steady, forward momentum also keeps the remaining baits in play, increasing chances for multiple hook ups.

END GAMES – Throughout the fight, muster just enough forward momentum to keep the angler straight to and tight with the fish (read: no slack or “bellies” in the line). This is particularly critical with a heavy lure or weighted bait, which could be shaken free with any slack.

Shifting into neutral during the end stages could also be disastrous. The objective here is to not alter the rhythm of the fight and fish swimming toward the boat.  Instead, bump the throttles in and out of gear, hold a straight heading, and lead the fish alongside the boat.

Full stand still mode comes after the catch has been released, or deposited into the cooler, and congratulations are in order.