When the crowds leave the Florida Keys in August, the dolphin bite really heats up. 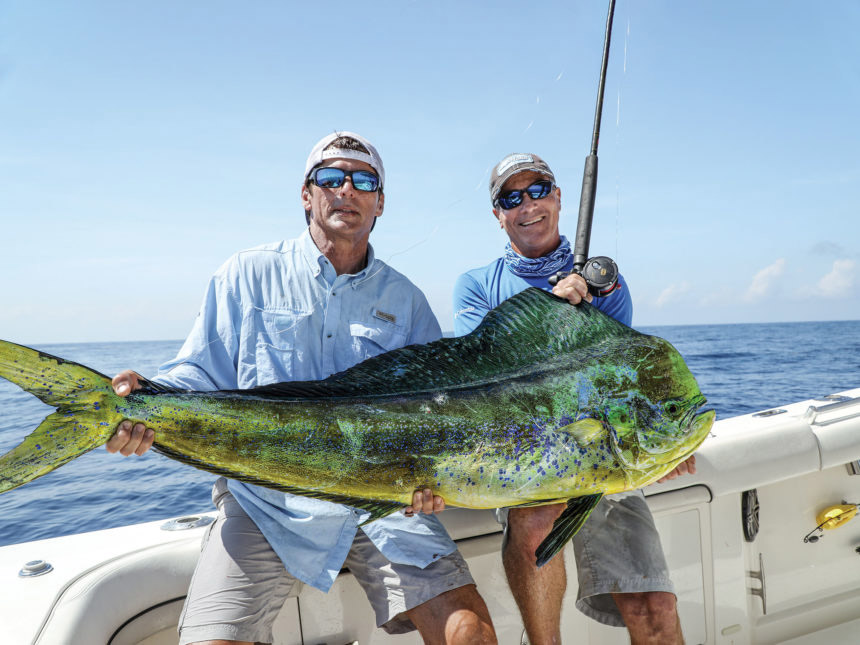 We were drifting deep baits for blackfin tuna over Islamorada’s 409 Hump, all eyes focused on our rods—except for Nathan Quinn’s. Fortunately for us, he spotted a big mahi swimming past the side of the boat the rest of us weren’t paying attention to.

He pointed in the direction of the migrating fish, and I followed up by grabbing a 20-pound spinning outfit and pitching a ballyhoo far up-current.

A few moments later, a large bull mahi took to the air without so much as bouncing the rod tip. It had consumed the ballyhoo while swimming back to our boat. I got tight to the fish and spent the next 30 or so minutes bringing the 38-pounder to gaff. September had once again lived up to its reputation as a peak mahi time off the Florida Keys. 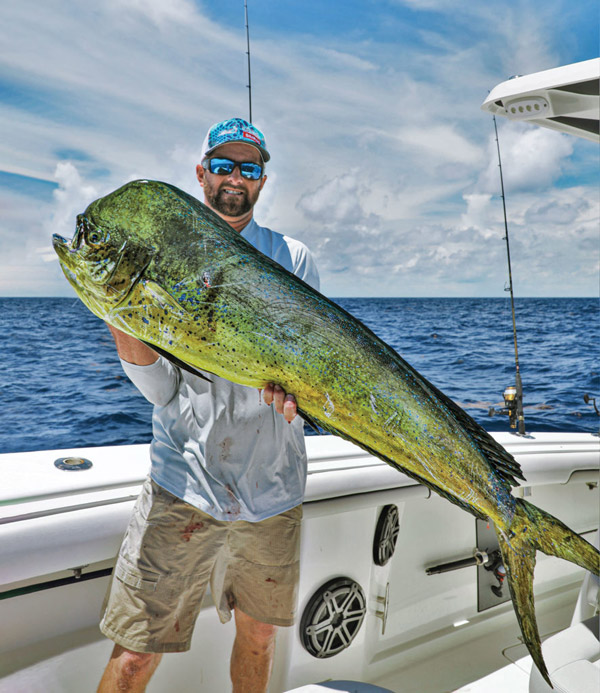 Anglers should check every piece of floating debris or weed edge for dolphin.

Quality Fishing Without the Boat Traffic

August, September and even October are referred to as the doldrums in the Florida Keys, but not because of the fishing. The island chain is quiet, tourist-wise, and even the ocean becomes a lonely place, particularly during a weekday. But don’t break out the violins just yet. This period delivers some of the best mahi fishing of the year, and you can bet the local anglers like to keep it all to themselves.

I recall doing a seminar with Capt. Bouncer Smith over two decades ago and being asked to pick one month for big mahi. Smith answered May, and I replied August. Both are correct answers, but I dusted off my old scrapbooks and photo albums to see if my records could shed some light on the question. I counted the big mahi we caught during just these two months. Numerous 20-pounders and some 30- and 40-pound fish were taken in both May and August, but the edge slightly favored August. Of course, big fish were also caught sporadically throughout the summer, but May and August were the most consistent months for fish of 30 pounds and heavier. 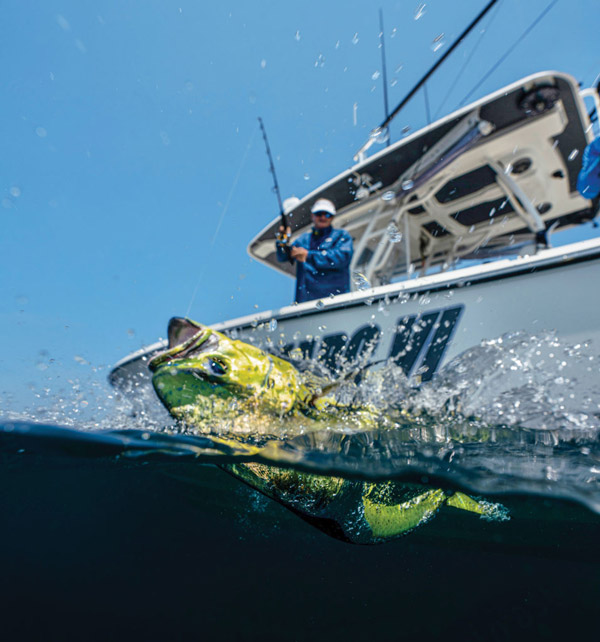 Broken bottom between 450 and 750 feet is consistent for dolphin, above.

Not Your Grandfather’s Mahi Season

Shannon Attales, who captains Enigma out of Islamorada’s World Wide Sportsman, claims August, September and October have certainly produced good mahi action over the past few years. “It’s hard to say why mahi fishing has become so good during this period,” Attales says. “But the sargassum weed has been much more abundant, and ballyhoo have been arriving earlier on our reefs. Come early fall, it’s not unusual to see mahi chasing ballyhoo in 30 feet of water—singles or pairs of 20- to 30-pounders.

“As we begin sliding into September and October, the broken bottom between 450 and 750 feet becomes very consistent for mahi,” Attales continues. “I believe the current strikes this bottom and pushes upwellings of cooler water closer to the surface. We’re swordfishing on the ledge a bunch during this time and don’t see as many mahi that far beyond this broken bottom.”

Attales says easy-to-spot birds working the surface thin out over this period, making it harder to uncover migrating packs of mahi. “It’s a matter of checking out every piece of debris, no matter how small, and any weed edges, no matter how slight,” he says.

Fast-paced running- and-gunning for birds or uncovering weed patches and debris is a viable option early in the season, but trolling takes precedence during the late show. “We’ll troll four outfits,” Attales says. “Usually, it’s a pair of Islamorada Flyer Lures way back on flat lines, and a ballyhoo/chugger and a plain ballyhoo from the outriggers. Covering ground along any bit of weeds or concentrations of flyers is the way to uncover mahi then.”

Marathon Capt. Ariel Medero agrees trolling is key for catching late-season mahi. “The birds are not on the fish like early on,” he says. “So, I’ll troll along any weeds or debris I see.”

This past October, Medero and I were fishing for late-season mahi and came across a large, submerged cargo net in 600 feet of water. Thinking we had just found a diamond mine, it only gave up one mahi. As we continued seaward, my SiriusXM Marine Fish Mapping analysis showed a strong plankton front not that much farther offshore. Here, flying fish showered from an off-blue ocean sprinkled with barely discernible patches of sargassum. Dragging a pair of ballyhoo uncovered a large school of mahi. The scene repeated itself even farther offshore. This served as a prime example as to the importance of investigating even what appears as a marginal find. It could very well produce the homerun hit. 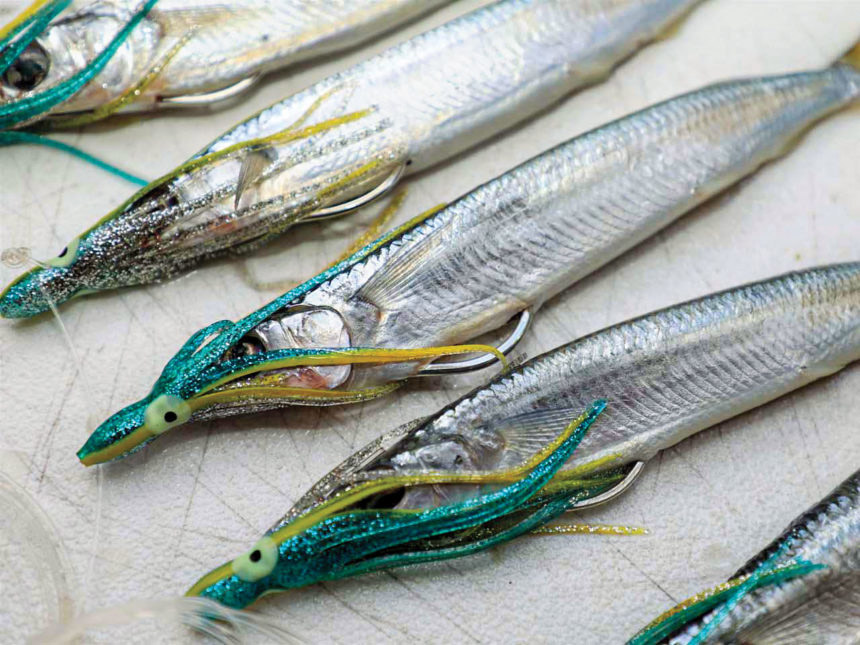 Rig ballyhoo weedless, with the hook inverted into the bait and a small skirt.

When sargassum weed is dense, I rig my ballyhoo weedless, with the hook inverted into the bait and a small skirt over its snout. Despite how dense the weeds are, we can troll without fouling our baits. Therefore, our baits remain in play in sargassum-rich areas that some anglers avoid for fear of their traditional baits and lures collecting a bunch of salad.

Pay attention to the size of flying fish in an area because mahi often go on selective feeds. If the flyers are small, troll small ballyhoo with small blue skirts over their snouts. If the flyers are large, deploy medium or large skirted ballyhoo. Make your offerings mimic those flyers in terms of both size and color. If mahi are around but avoiding your trolling spread, this trick can change your luck. 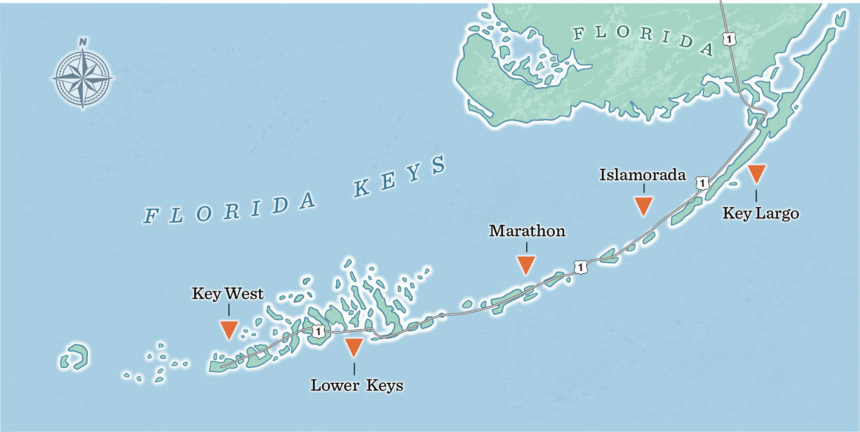 The entire length of the Keys has mahi fishing opportunities.
Steve Sanford

The entire length of the Florida Keys has mahi fishing opportunities in late summer and early fall, including well-known tourist hubs such as Key Largo, Islamorada, Marathon, the lower Keys and Key West.

DIY dolphin fishing is definitely possible if you have a capable boat, trailer and tackle. But it still might be easier to book a trip with one of the many local experienced captains.

If you’re on the fence about planning a Florida Keys mahi trip during August, September or even into October, Medero sums it up perfectly: “The fish are here, the waters are less crowded, and you might even get a break on your hotel room. What’s not to like?” 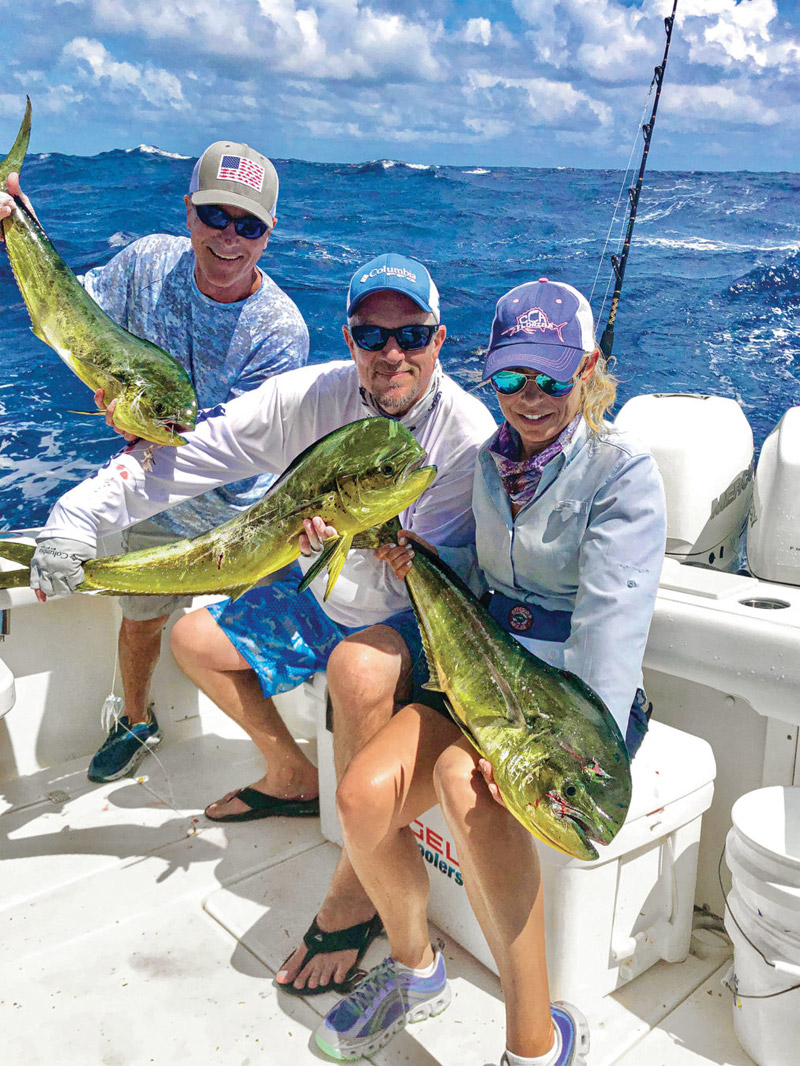 Trolling around scattered weeds can lead to a dolphin gold mine.

Here’s a sampling of places I’ll stay when fishing in the Florida Keys: 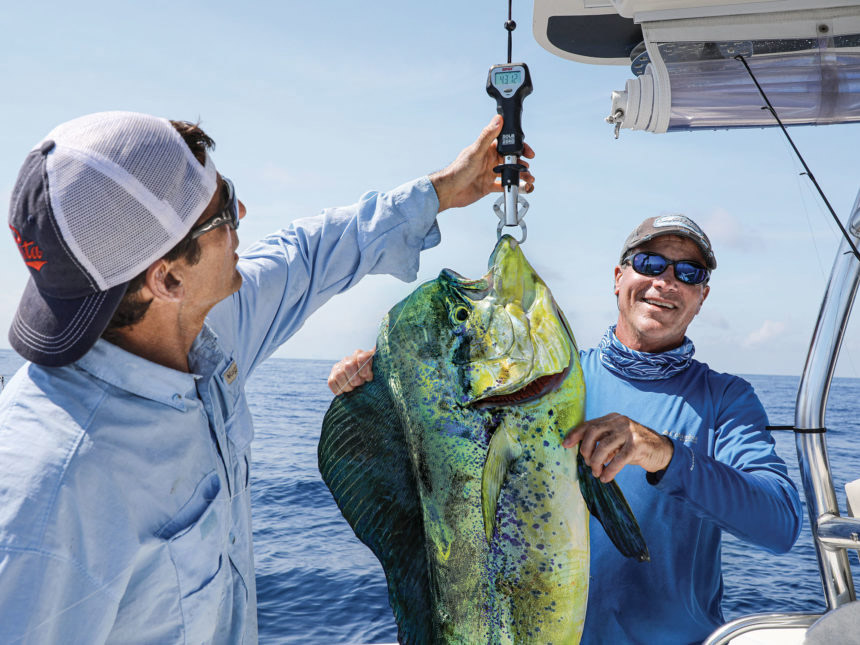 Bruiser dolphin are worth weighing on a scale, even to brag with buds.

Here’s a sampling of captains to consider when fishing in the Florida Keys: