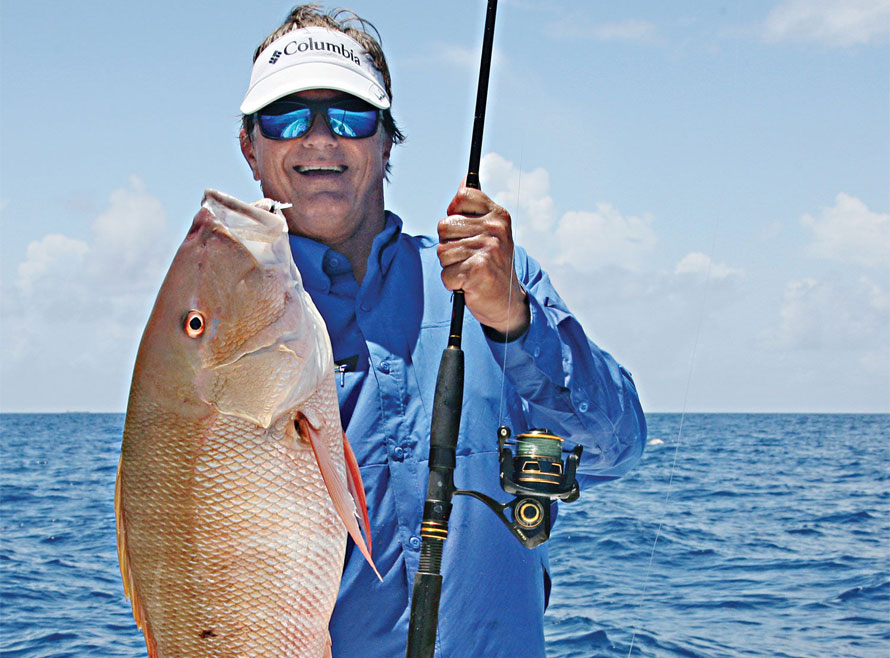 Capt. Jimmy Gagliardini idled over a lively looking wreck in 225 feet of ­water. Rather than fish near the structure, he intentionally motored up-current several hundred feet, well off its port side. Here, he shifted into neutral and said, “Let’s drop.”

With spinning reels in sizes more for redfish and seatrout and spooled with 20-pound braid, it initially felt odd drifting a live bait a couple of hundred feet down for big mutton snapper, especially that far from the wreck. Yet ­Gagliardini is among the best in Marathon in the Florida Keys at catching deepwater muttons on light tackle. Considering hungry sharks and potential cutoffs on these wrecks, light tackle seemed a foolish idea. But, after catching our sixth big mutton snapper and not losing a single one to teeth or metal, it was proving more fun — and perhaps even more productive — than with heavier gear. We went on to enjoy 10 superb light-tackle fights with muttons between 10 and 15 pounds.

OF FISH AND WRECKS

Traditional wreck fishing calls for anchoring up-current and chumming while free-lining and ­lowering baits, or power-​drifting and dropping baits on these hulks. Under prime conditions — manageable current flowing in the right direction — and time of year, amberjack, African pompano, cobia, grouper and snapper headline the catch. But there’s also risk of losing them to the wreck, hence the preference for heavy tackle.

Gagliardini takes a different approach. Muttons frequent wrecks but tend to cruise the perimeter around rubble, sea fans and grassy bottom types, sometimes several hundred feet off a structure. This is where Gagliardini targets them. He has several wrecks between 150 and 240 feet, close to each other with nonthreatening bottom between them, where he drifts for muttons with light tackle. 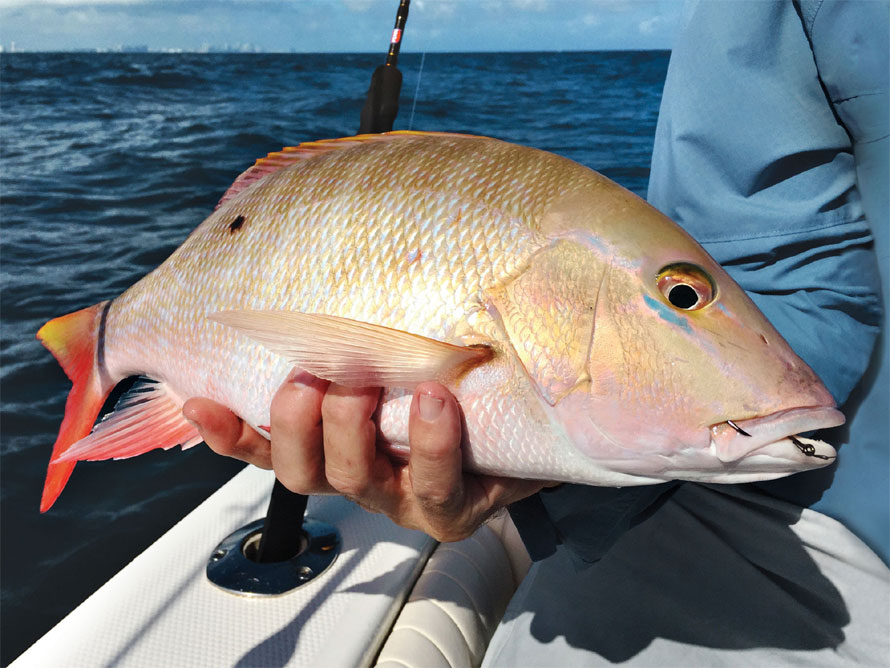 Having crushed big mangrove snapper and even a 20-pound black grouper over shallow patch reefs earlier that morning, Gagliardini suggested we use the same light spinning tackle for deepwater muttons, albeit with terminal gear modifications. After putting a short Bimini twist in the braid, we slid the double line through one eye of a 150-pound barrel swivel and then tied it to the eye of a second barrel swivel. The eye of the hanging swivel would be used to secure the weight (more on this later).

When not overly aggressive, muttons often bite and drop a bait a few times before consuming or declining it. Should a wary mutton tug at a bait and feel resistance, the game is over. To dampen any unnatural feel, we tied 25 to 30 feet of 30- to 40-pound fluorocarbon to the main swivel, complete with a 5/0 to 7/0 in-line circle hook. The calm seas and slight current allowed us to hold bottom with a 10-ounce sinker. Each sinker was tied to 24 inches of 15-pound mono secured to the barrel swivel riding on the main line.

Our livewell was brimming with mutton delicacies the likes of ballyhoo, pinfish, permit-size blue crabs and pilchards. Though muttons seldom refuse live baits, they sometimes do, so, just in case, we had fresh bonito (for chunks), squid, and freshly killed and butterflied ballyhoo from the livewell on ice. To keep our baits swimming tauntingly within mutton environs, the point of the circle hook was inserted into the mouth of the pilchard and out through the hard cartilage area just behind its upper jaw. With pinfish and ballyhoo, the circle hook was inserted through both lower and upper jaws, in that order. Live crabs were hooked by their points. 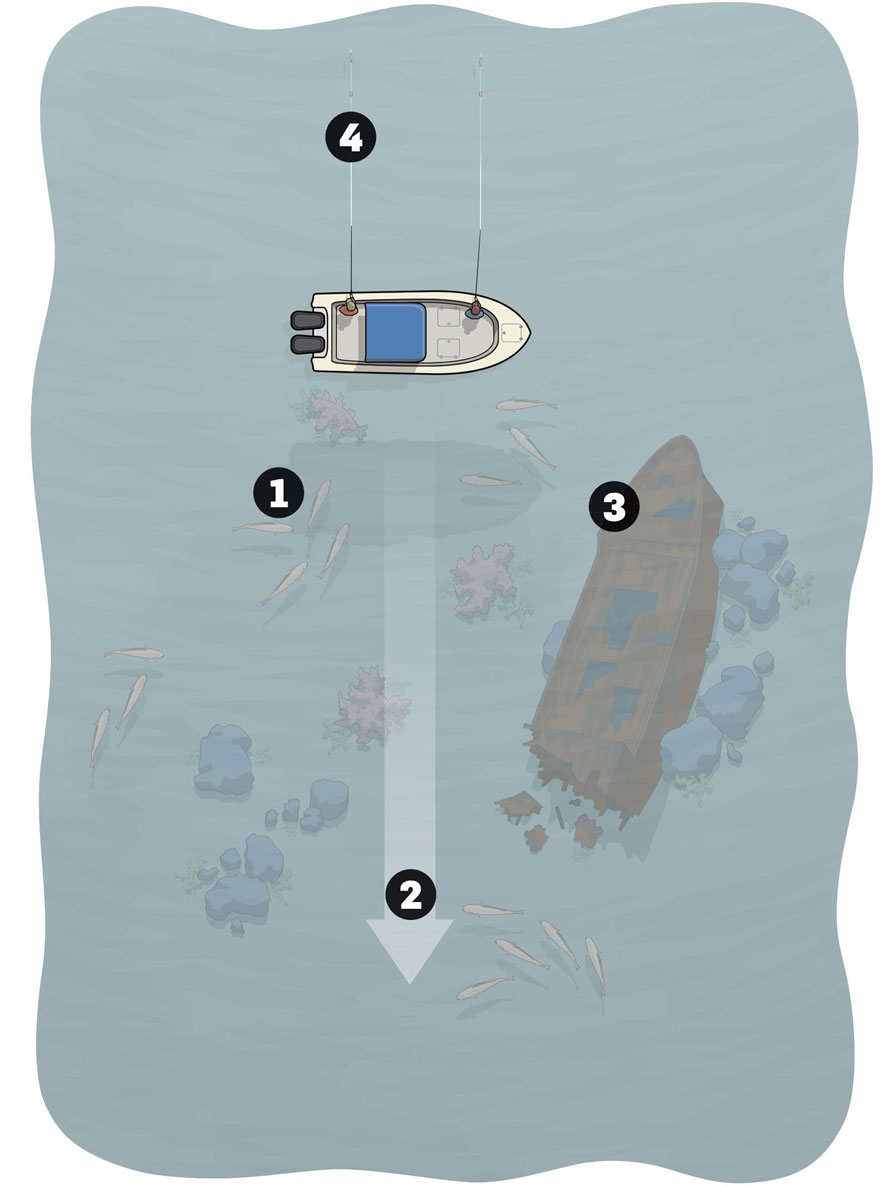 Line Up Your Drift

As our trip played out, we saw the muttons’ feeding habits change. Initially, live pinfish were the hot bait. Then the bite was on live ballyhoo. Eventually, the muttons turned a cold dorsal to the liveys. That’s when Gagliardini butterflied a freshly killed ballyhoo and sent it down. While I continued live-baiting, he began catching muttons on the fresh ballyhoo. The moral: Come prepared with a wide selection of live and dead baits.

Once our sinkers reached the bottom, we held the line and slowly swam the baits along, frequently free-spooling to keep the sinker on the bottom. The braided line clearly telegraphed the panic vibrations of every bait that came under the surveillance of a mutton. At this stage, we closed the bail and let the mutton take the bait and bend the rod tip toward the water, then bend it further against the resistance. If done correctly, the circle hook will set and hold. 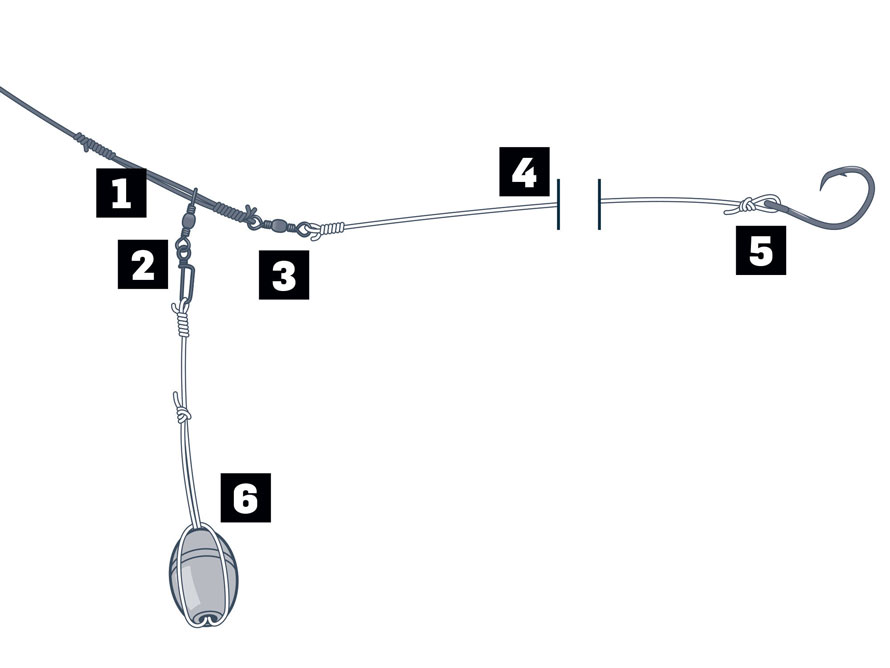 With pilchards, the hook goes in the roof of the mouth and out at the bridge of the nose

Hook pinfish through both jaws, from the bottom up.

Hook ballyhoo through both jaws, from the bottom up.

Hook crabs at either of the two points, also from the bottom up.

Once a mutton realizes it has been hoodwinked, it’ll race along the ocean floor. On several occasions, I recall the shiny bottom of my spool becoming increasingly visible as line kept paying out, but the drag always did its job, and every fish eventually stopped. Finessing one up from the depths, as it counters with bulldogged but progressively shorter runs in the current, takes time. You better be ready for a fight that may take upward of 20 minutes, depending on the fish’s size. The best encouragement comes near the end of the fight when you look down through that clear blue ­water and see pink. That splash of pink gets larger as it nears the surface, delivering the shot of adrenaline you need to end the fight, take hold of the long leader and smoothly lead the fish boat-side.

After drifting well down-current of a wreck, we moved back up and duplicated the same drift if we scored, consulting our trail on the chart plotter. If fishless, we tried a long drift along the opposite side of the wreck, covering ground within mutton territory in hopes of intercepting a school of the tasty snapper. It was a perfect outing. Gagliardini took us to a collection of deep wrecks, and we fished the surrounding areas (not the wrecks themselves) with light spinning tackle. The bites came fast, and when the smoke cleared, we hadn’t lost a single mutton snapper to a wreck or a shark. Pulling up big muttons from the depths was a blast. Hooking the fish near deep wrecks, instead of right on them, was a different twist for me, but it’s one of Gagliardini’s most requested magic tricks.

HUNTING GROUNDS: Knowing the location of wrecks is key to locating muttons on the prowl.

SAFE DISTANCE: Drift near bottom structure instead of over it to prevent big fish from breaking off.

TOUGH ENOUGH: 20- to 30-pound spinning outfits are sporty but brawny enough for the task. 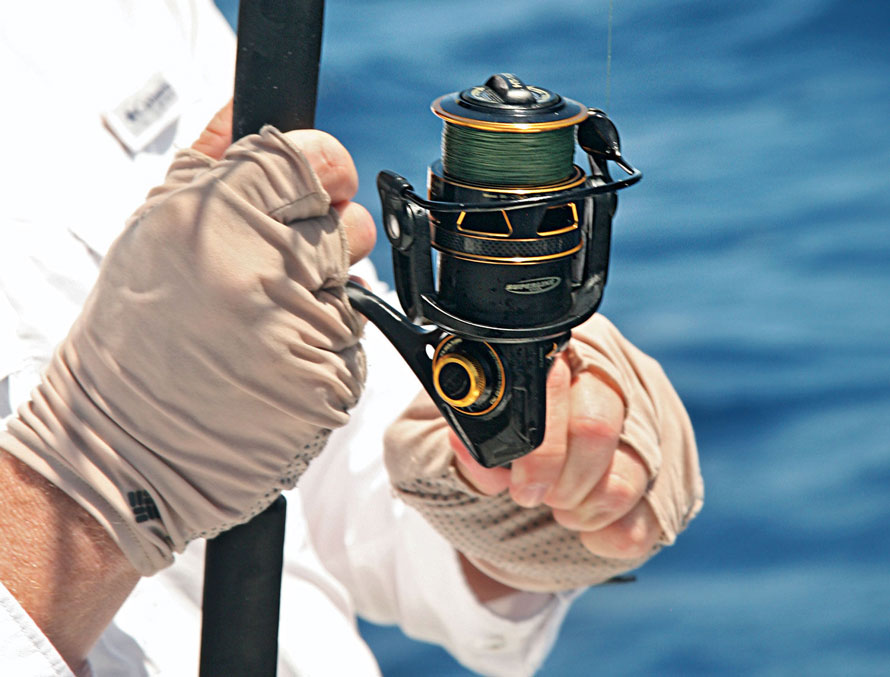 GO FOR A SPIN

Mutton snapper are caught nearly year-round in the Keys; however, spring is the best time for bigger fish, and the action continues well into summer. Come fall, there’s another influx of muttons, although those are usually smaller fish.
Tackle Box