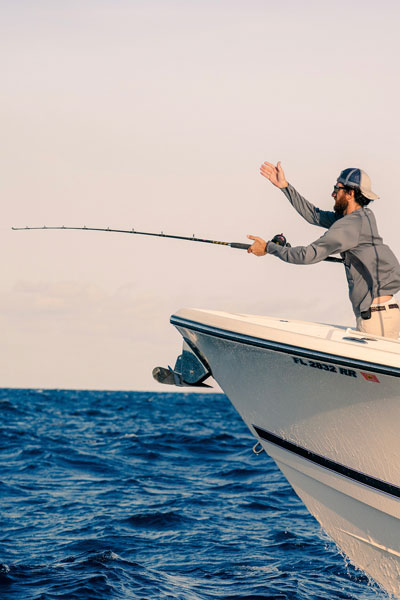 Chasing a hard-charging trophy fish involves foresight based on the nature of the species, its environment and preferred tackle and line class. Simply watching a fish empty line from a reel - or hoping to avoid the inevitable by tightening the drag - are angling mistakes of the unforgivable kind.

STUNT DRIVING – Chasing down a long-running fish prevents it from stripping a reel, obviously. The reduction in drag pressure during the chase also keeps the line from parting and hook from straightening or ripping free. But more is required to be successful.

For example, the decreasing diameter of line on a reel’s spool will result in an increase in drag pressure, proportionately. Combined with the resistance from a large amount of line being pulled through the water and a broken line is imminent – unless quick action is taken (i.e. loosening the drag and giving chase).

BUT WAIT! THERE’S MORE! – Flotsam, the likes of thick Sargassum concentrations, can also become a viable threat offshore.  The more line paying through the water, the better the risk of it abrading or parting by contacting, dragging through or collecting weed clumps.  Snagging weeds also increases drag pressure and interferes with maintaining a straight pull on a fish. Keeping in close proximity to a fish in weed-rich waters provides the ability to “steer” the fishing line around these threats.

WHEN TO GIVE CHASE - Such a call hinges on species and tackle. For offshore pelagics, I’ll seriously consider giving chase around the quarter spool mark – providing a fish shows no signs of slowing; and way sooner with lighter line and challenging conditions the likes of rough seas and thick weeds.

A perfect example of this occurred in May, as we fought a sailfish on 20lb tackle. Trucking seaward with no signs of slowing, the sailfish blazed through heavy Sargassum concentrations. During the process, the mono line embedded itself within two clumps so large, they actually “anchored” it in place!

With the sailfish greyhounding at a 90-degree angle to the line pinned by the Sargassum clumps, Abie Raymond instinctively reduced the drag to keep the line from parting. He successfully shook off one clump and removed the other with a gaff. The threat being eliminated, he advanced the drag and quickly wound straight and tight to the fish. The fight certainly had its moments of doubt, but we prevailed by chasing down and releasing the sailfish.

These situations aren’t species exclusive. For example, Corinne North Fuller hooked a beauty of a dolphin on 12lb spin tackle, and on a slick Islamorada, Florida Keys, ocean.  Her first offshore fishing encounter was going brilliantly - until we came upon thick patches of weeds.

Given the size of this fish and light line, I never let it get beyond a couple hundred feet from the boat - max. I closed the gap even more as we approached the weeds, encouraging Corinne to “steer” her line around any threatening clumps. She did exactly that and we soon boated a 36lb dolphin.

More recently, the same tactic helped Carl Grassi “weed” through challenging conditions to boat a 45lb dolphin off Miami.  With both large dolphin encounters, going on the offensive and remaining close to the fish paid off.

CHASING PELAGICS – Keeping close to a fish is a good thing.  Yet, constantly running up on it can prolong a fight, as they’ll expend less energy. It’s a fine balance between remaining close for maximum angler control and line preservation, and letting the fish run off enough line so it tires faster.

In clean water, let the fish run off 50 to 100 yards or so, then pursue it with just enough momentum to keep a pronounced bend in the rod and angler gaining line under pressure.  Once the gap closes to around 50 to 100 feet or so, shift into neutral and let the fish run off more line before repeating the tactic.

If possible, pursue a fish from the side it’s hooked on for a straighter pull, the ability to “steer” it when it tires, and minimize the risk of the line dragging across its body or tail-wrapping.

Communication between angler and helmsman is crucial; I want to know roughly how far off the fish is (should my perspective differ), the exact angle it’s heading, and if the angler is successfully reacquiring line under pressure as I motor forward. Once the chase nears the end, I’ll get the angler back into the cockpit and ease ahead of the fish for the landing/releasing duties.

CHASING BOTTOM DWELLERS? Albeit it far shorter and more intense than running down pelagics, successful bottom anglers know the importance of giving chase.  For example, if reef fishing adjacent to a pronounced ledge or contour drop, a large bottom fish, like an amberjack, African pompano and even a cobia, may run straight off that ledge. Should the boat remain stationary, the descending angle of the line will surely drag along that edge and part.

If an “unstoppable” fish charges off in such a direction, the helmsman needs to charge off with it. The goal: keep the angler’s line as vertical as possible and follow the fish off any pronounced ledge.

It’s a bit different when power-drifting for big bottom fish on wrecks. Upon hooking up alongside such a structure, the helmsman should help the angler “muscle” the fish from the hulk by immediately powering away from it.

INSHORE, TOO – Follow some of these bottom guidelines for large inshore species the likes of cobia, tarpon, big snook and permit, which stack along pronounced ledges, channels and inlets.

Chasing may also prevent a fish from charging into bridges, docks, shore line structures and even other vessels. The trick here, if possible, is to get between the hooked fish and threatening structure; the pressure on the fish may force it to run in the opposite direction and away from such obstacles.

OF “COCKTAIL” ANCHORS AND BIG FISH - Pelagics the likes of cobia, king mackerel, permit, sailfish and even wahoo and tuna often show behind boats anchored on a wreck or bottom structure. To succeed at catching them on light tackle, a quick chase is a prerequisite.

Many modern boats (mine included) sport windless anchors. I refer to them as “cocktail” anchors, merely because they’re far better suited for partying at local sand bars than for fishing. Hook a powerful fish with the windless anchor out, and it will never be retrieved quickly enough to give chase.  That’s why I also carry an “old school” anchor with two 150’ clip-on sections of rode for bottom fishing.

I clip the rode’s bitter end to a poly ball. Should a fish require chasing, we quickly uncleat the rode, toss it overboard, and give chase; no time lost. After the fight, we simply run back to our spot, retrieve the poly ball and re-cleat the rode. And to be very precise on where to re cleat, a wrap of bright tape on the rode will ID the mark.