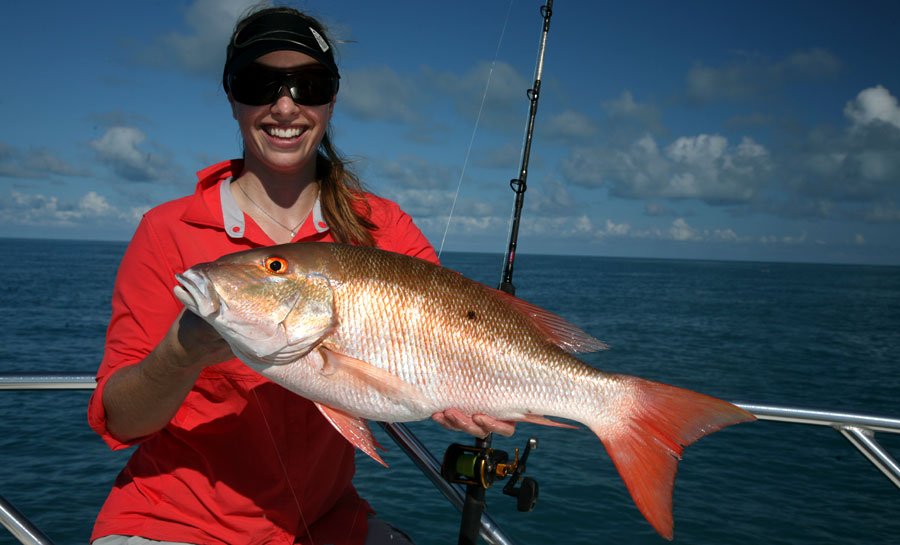 The live pinfish hadn’t been on the bottom for more than a minute or two before Andrea Pallavicini hooked into yet another fish. Rather than leaning into the coaming bolster and cranking her adversary to the surface, like she had been doing, she scrambled to the opposite side of the cockpit, trying to keep tight to a fish that was peeling off a respectable amount of 20-pound braided line.

I guessed mutton snapper, since it was fighting like the one she’d landed earlier. Sure enough, and none too soon for Pallavicini, a beautiful pink snapper came into view, then into the boat. Lightning struck twice for her, and she was showing up the guys aboard the MARC VI. Maybe it was simply a matter of beginner’s luck, as this was her first fishing trip to Key West, Florida. But she was racking up impressive catches of both mutton and mangrove snapper, and even gag and red grouper. The girl was on a roll, and making my fish box look good.

What do I know about bottomfishing off the Marquesas Keys, an atoll some 28 miles west of Key West? Well, if I had a crisp hundred-dollar bill for every time I fished down here, I’d be the owner of Salt Water Sportsman magazine today, not just its editor at large. Actually, I was introduced to the Marquesas when I was around 9 or 10 years old, by my dad and his friend Bob Colvin. Both gentlemen recently passed on, but catching grouper and snapper off the Marquesas was a passion of my dad’s for decades, and he’d trailer his boat down at every opportunity. We’d fish here countless times each year, sometimes even camping on the boat after a long day so we could catch grouper and snapper at night. Then there were those three-day weekends during which we didn’t come back to Key West. We’d fished here so many times that, when I was in my 20s, I used to cringe when I heard him mention the word Marquesas.

The reason this area is so appealing is the outstanding bottomfishing. For someone who likes fishing but is a bit impatient, this is the ideal remedy for angling boredom. There’s no waiting for maybe a few strikes all day. Quite the contrary. The rods are almost always bending here, whether it’s from a good bite of mangroves or muttons, gags or red groupers, or a mix of species. Of course, pesky grunts, small yellowtail and even sharks get in on the act. What’s more, you can bank on tangling with a goliath grouper or big barracuda. I recall when, a couple of years back, a 40-plus-pound barracuda ate, in one bite, nearly half of a 20-pound grouper I had reeled up to the boat from a rock pile in 20 feet of water.

Fishing off the Marquesas is easy too; there’s no frozen chum to haul down (chumming here is actually a deterrent, as it attracts sharks), and live bait isn’t a necessity. The best baits are cut ballyhoo, Spanish sardines and squid. And if you’re into live-bait fishing, pinfish are easy to catch around the Key West grass flats with a pinfish trap set overnight. And while pinfish are often candy to groupers and snappers, sometimes fish prefer the cut baits.

Also appealing is the light fishing pressure. Credit that to the variety of fishing around Key West, plus it’s a bit of a hike to reach the Marquesas. But even when the wind is blowing out here, you can generally fish the downwind side of the islands over rock piles between 20 and 40 feet deep.

Most of the bottomfishing around the Marquesas is in the Gulf of Mexico. The bottom is mostly sand and mud, so it’s essential to locate the scattered rock piles that hold bait and game fish. These rock piles range from widely scattered small clusters to large, sprawling areas. The larger, more productive piles are from eight to 15 miles west of the Marquesas. But there’s excellent fishing within a few miles of the islands too, to their west and northwest.

Capt. Mark Schmidt, a Key West guide who knows these rock piles well, advises newcomers to consult a fishing chart to identify rocky areas. In addition, he recommends paying close attention to the fish finder, which often uncovers new spots. “Rock piles and hard, broken bottom run from 20 to 40 feet out here,” says Schmidt. “I prefer fishing over the shallower spots and then working deeper if need be. During the summer, when water temperatures are at their warmest, I’ll work deeper. From Key West, it’s about 20 miles to productive fishing.”

Fishing is always good over the Marquesas rock piles, with some months simply better than others. During the winter, gag grouper are more abundant and bigger. Red grouper are also in the mix, with some mutton snapper. Schmidt says that winter is when big jack crevalle, mackerel and even kingfish join the mix, giving bottom anglers some pelagic variety. During the spring, mutton snapper are more abundant and highly reliable targets, and plenty of quality gag groupers are still around. In the summer, there are some muttons, more mangrove snapper and more red grouper. And in the fall, when I was there last, it’s mostly red grouper and mangrove snapper, plus a few muttons and some gags. As I mentioned earlier, goliath grouper and big barracuda are always here.

Tools of the Trade

On my most recent trip this past September, we ventured to the Marquesas rock piles and used light but strong conventional outfits loaded with 15-pound and 20-pound braid to whip everything from mangrove snappers to goliaths. The beauty out here is that the same tackle and baits are used for all species of bottomfish.

I tied a short Bimini twist in the braid and used a Bristol knot to secure 6 feet of 30-pound fluorocarbon leader to the double line. I slipped a small egg sinker onto the leader and, with an overhand loop knot, tied on a 7/0 VMC Tournament Circle in-line hook. This is called a knocker rig, and we used it with both live and dead baits. Our rods were rated for 30- to 80-pound-test lines. In all, our outfits felt more like 12-pound-class bait-casting tackle, but they had the backbone and power to stop just about anything on these rock piles.

On that last trip, Andrea Pallavicini, Ryan Gilligan, Kevin Blinkoff and I were on a particular rock pile, with the boat anchored and three of the four of us fishing. I looked over and saw all of them hook up simultaneously. Blinkoff landed a mangrove snapper, Pallavicini a red grouper, and Gilligan a gag grouper. This Marquesas trifecta perfectly illustrates the great fishing while including three of the four key species that thrive on these rock piles. The other is mutton snapper, which Pallavicini had dispatched earlier.

Just how active this fishing can be was clearly evident my past two trips. On one day last September, we caught upwards of 60 fish, of which several were legal size. The next day was nearly a carbon copy of the first, with the exception of a 50-pound goliath grouper that put up a brilliant fight after unsuccessfully trying to hole up in the rock pile beneath us; it then opted to run as far as it could in search of a new sanctuary, which it never found. Thank goodness for the tiny diameter of braided line, which gave that small reel plenty of line capacity to survive a long run from an anchored boat. My trip 10 months prior with Schmidt yielded plenty of mangrove snapper and red grouper and yet another chunky goliath grouper. But this is the way it is down here on most occasions.

Other than a few fish we decided to keep, we released our bounty. The law states that only in-line circle hooks may be used for bottomfish in the Gulf of Mexico and that every boat must carry a dehooker and a venting tool. Even when we were dropping live-pinfish- and bait-tipped jigs, Schmidt and I used circle-hook jig heads. Fortunately, the waters here are shallow enough that rapid decompression isn’t a factor, so releasing fish isn’t a challenge.

If you’re looking for some exciting fishing down in the Florida Keys, take a serious look at the rock piles off the Marquesas. I guarantee that once you get a taste of this fishing, you’ll be hooked for good. It’s fun, simple, fast and ultra-productive. In short, it will keep everyone happy except for the fish.

Baits: Live pinfish and cut ballyhoo, Spanish sardines and squid, all fished on a knocker rig.

Other: If you’re into live-bait fishing, pinfish are easy to catch around the Key West grass flats with a pinfish trap set out overnight.

The Westin Key West Resort and Marina (305-294-4000; westinkeywestresort.com) is an ideal place to stay. It is located in the heart of Key West and within walking distance of major attractions, restaurants and bars.

What: Bottomfishing for a mixed bag of groupers and snappers.

Who: With proper planning and experience, boaters can fish the Marquesas on their own with relative ease. Remember that it’s a long way from civilization and plan accordingly. The following Key West guides are Marquesas rock-pile veterans and come highly recommended.