Celebrating
22
YEARS OF NATIONAL TELEVISION
FISHING EXCELLENCE
ON THE EDGE 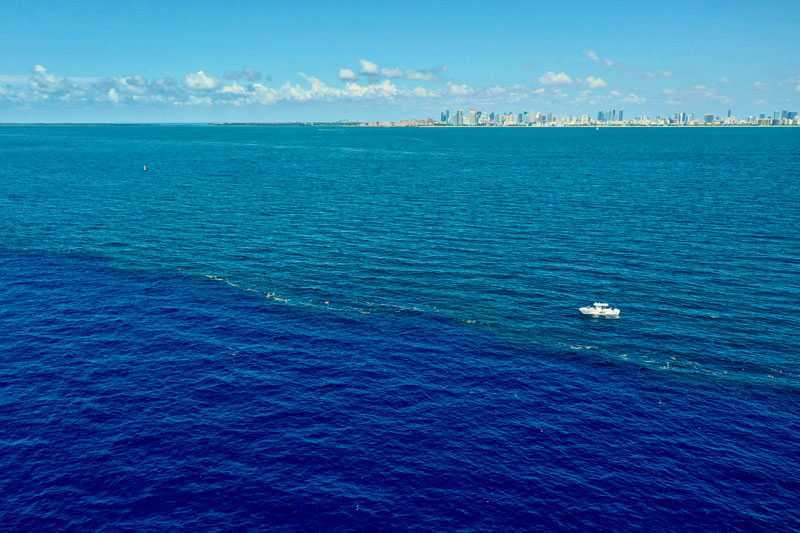 Surface oriented transitional zones form when two currents or segments of water oppose each other. These include tidal rips, edges of warm core eddies, abrupt color changes, sharp water surface temperature breaks and even weedlines. If they exist within the preferred temperature and depth realm of the targeted species, the odds of angling success soar.

SHAKEN AND STIRRED - Upwellings and agitated waters disperse plankton, microscopic organisms and related forage species into the mid- and upper water columns. On the surface, weeds and debris often collect along these edges. The longer these mini ecosystems remain in place, the more likely they'll yield game fish.

As basic as such features may appear, questions abound on the preferred ways to fish them. That is, dirty side versus clean side? Cooler side versus warmer side? Surface baits versus deep baits?, etc. Success here is measured by an angler's understanding of exactly what is transpiring and how to take advantage of it.

GETTING EDGY - A major color change/rip occured off Miami recently, where Harry Vernon III and I were drifting live baits. In around 250 feet, the division between royal blue offshore water and dirty turquoise slope water was remarkable. Our efforts inside this edge proved futile, save for a few king mackerel cut offs, as did those farther out into the blue. Yet, tight to it, dolphin preyed upon flying fish. Despite their pushing rapidly to the south, we'd race ahead of the foraging dolphin, pitch baits at them, box a few and repeat the tactic until we caught our share. We remained on the clean side of the rip.  A bit later, we went one for two on sailfish and boated a blackfin tuna.

This offshore current pushing tight against the slope water created upwellings and a rip ripe with scattered weeds and bait. Flyers gathered amid the heavier plankton concentrations, in turn attracting dolphin. Though strictly live-baiting, we wondered what a full trolling effort might have produced.

When trolling such rips, however, I prefer a broad "zig-zag" pattern, mainly on the clean side. That is, baits are towed right along the edge for a bit, then offshore of it by a few hundred feet or more, back along side it, etc. A subsurface bait is often fished off a flat line, either a deep-diving swimming plug or weighted trolling skirt tipped with a ballyhoo.

Why the blue side?  Pelagics are likely traveling in the stronger current and diverting to sharp edges for feeding purposes. If the action is slow, however, we'll cut across and pull baits on the dirty side, hoping for a change of luck.

The "zig-zag" trolling strategy really shines when multiple weedlines, and rips, are relatively close together, say a 1/4 to a 1/2 mile apart. I'll broaden this pattern to encompass both zones.  By doing so, we've taken quality fish transitioning between these finds.

RIP UP THE NUMBERS - When a hard current strikes a moderate to heavy breeze head on, sailfish tailing conditions materialize off Miami and especially throughout the Florida Keys. "The Florida Keys see the best of this, especially in April and May," says Captain Ryan Wenzel, who operates his triple-powered, 37 foot center console from Islamorada's World Wide Sportsman.

"In the Florida Keys, the wind needs to be blowing in an east/southeasterly fashion, to where it parallels the reefs, and the current must be running hard directly into the wind", says Wenzel. "There will be three tiers of water color: green, powder blue and deep blue. I prefer powder blue because the sails show much easier. They're tailing, using the waves to help their migration against the current. I'll have at least a couple guys in the tower looking for tailing sails. We belly-hook live pilchards and pitch them to the sails on spin tackle. We released 21 sailfish on our best day. The next day, we took our bay boat offshore and released 14 sails. It's the most fun I ever had fishing."

Wenzel's strategy is to run down sea to a starting point, then idle into the waves looking for fish. When the current carries them up a good bit, they'll run back for a re-set. "It's not only sailfish in here; we've caught cobia, dolphin and seen wahoo and even bluefin tuna tailing, said Wenzel."

BILLY'S WONDERLAND - Few rips are as fabled as those off Louisiana, formed by the outflow of the Mississippi River. I've fished these rips from Venice numerous times, catching white and blue marlin, wahoo, tuna and dolphin.

Captain Billy Wells prefers rips with cobalt blue water on one side and dirty brown River water on the other. "I always fish the cleaner side of the rip as far as grass is concerned," says Wells. "If it's clean water against dirty River water, I'll fish the clean water side. But, if the rip is clean green water on blue - and the blue side is covered with scattered grass and that green side is clean, I'll fish the green side."

Wells prefers rips in the 1000 foot range, but reasons the most important element is time. "The longer the rip has been in an area, the more grass it collects and, in turn, the more bait and game fish accumulate on it. This is when our rips really come alive."

UP JERSEY WAY - New Jersey's Tom Daffin adheres to a similar strategy. "When we're fishing warm core eddies in 50 fathoms or deeper, I'll concentrate on both sides of a break," says Daffin. "For marlin, I'm definately fishing in the cleaner, warmer water. Tuna can be on either side. Sometimes during summer, the warm temps on the hot side are a bit too much for the tuna to come up, and fishing on the dirty side is the way to go. More times than not, the bait is on the break or cooler side."

Daffin explains that the zones where an eddy spins from deep to shallow generally produce better than those along where it pulls back into deeper water. This is due to nutrient-rich upwellings resulting from the current striking the rising bottom.

Daffin isn't as concerned with water clarity on near shore rips. "On inshore structure and rip lines, I don't put a ton of credence in water temp or color," states Daffin. "It's nice to have clean water but it's not a deal breaker to have only dirty water - providing bait is present. The key here is bait."

LAYERING - The "dirty" edges of a rip or eddy often exist within just the upper water column. Therefore, if relegated to fishing within tide-influenced or roiled up waters, think deep - at least with one rod. Similar to surface boundaries, edges exist where tainted surface waters meet clean salt waters beneath them; these zones can be hidden treasures.

Staggering the depths of live baits via downriggers or weights is standard business for king mackerel, especially when slow-trolling or drifting along tide lines and rips. Surface baits entice predators high up on the rips, whereas sub surface baits aim for any "smokers" holding within the cleaner, purer salt water. Ditto for trolling the Venice Rips. Here, the dirty edge is merely a layer of surface water, and numerous big wahoo, tuna and billfish come from baits deployed beneath it.

CHEAT, CHEAT? A unique service now available to users of Simrad and Garmin electronics is SiriusXM's Fish Mapping. A most notable feature of this subscription service is its "30 Meter Subsurface Sea Temperature". Through satellite technology, water temperatures down to around 90 feet are revealed. This opens up a vast new fishery. For example, anglers can now identify zones where surface layers of dirty water cease, thermoclines exist, and any cold water upwellings which usually put the brakes on bottom fishing in tropical waters. This knowledge will also prove invaluable during those blistering hot summer days, when both bait and game fish remain deep, particularly among dolphin seekers.

LONGEVITY - Subscriber services like Roff's and now SiriusXM's Fish Mapping provide critical whereabouts on significant water surface temperature breaks, plankton concentrations, rips, edges, eddies and other ocean-circulation features in advance of an outing. Yet, remember, edges which have been in place the longest usually yield the best results. It's all about thriving mini-ecosystems.

Think in terms of a large piece of lumber dropped into the Gulf Stream. It will have no marine growth early on and, therefore, attract no sea life. However, the longer it remains at sea, the more growth it accumulates.  And the more abundant the growth, the more life it will harbor. In time, it will blossom into a game fish magnet, awaiting some lucky angler to happen upon it.