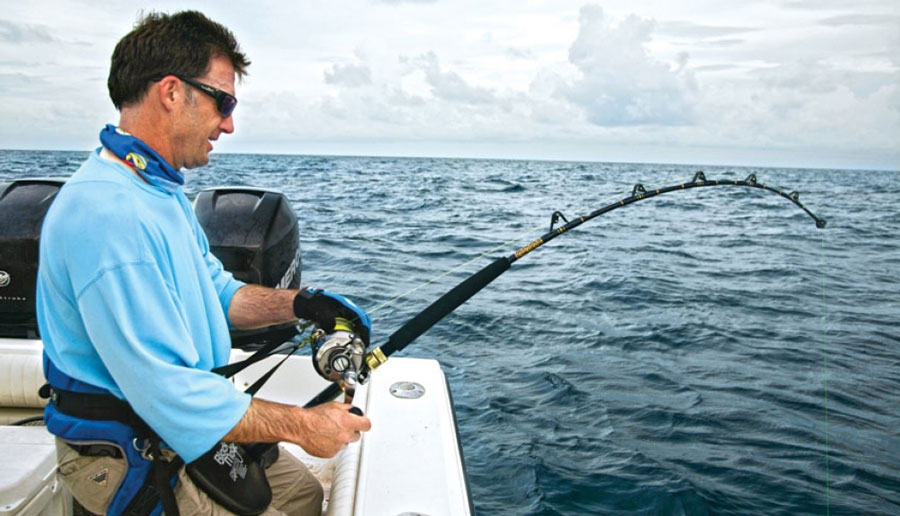 It had become a frustrating deal for SWS publisher Dave Morel, Chris Megan, Penn’s John Bartow and me. We were into a school of tuna 30 miles from Bimini, Bahamas but sharks kept picking off nearly every one we hooked. Suddenly, as if to add insult to injury, this huge dusky appeared alongside the MARC VI, eerily eyeballing us. This shark was big enough to impress even Morel and Megan — both staunch New England shark fanatics. Yet what Morel asked me to do next bordered on the unthinkable, at least for a southern Florida offshore angler.

Seensing I was about to say it was time to head for the barn and write this spot off to the sharks, Morel asked if he could catch the big dusky. I was speechless initially. For most southern Florida offshore anglers, it would have to be a painfully slow day to bait a shark — unless, of course, it was a mako. I didn’t want to mess with the shark, so I sidestepped the issue for a bit — but Morel pressed. I gave in to his third request and told him to fetch the shark rig out of my tackle bag. We attached the cable rig to a 50-pound stand-up outfit and eventually hand-fed a whole bonito to the monster alongside the boat.

Morel looked as happy as a middle-aged man who’d just purchased a new Corvette as the shark ran off line while he held on. We then faced another dilemma. The sun was hanging low, and we had to be back at Bimini Sands Resort and Marina for a 7 p.m. function (which we never made, thanks to Morel and that shark!). I told him to take the fight to the shark and end it soon one way or the other. At this, he donned a rod belt and stand-up harness and really pressured the beast. In less than an hour, we leadered the shark, clipped the cable near the hook and called it a long day.

A combination rod belt and harness, whether it’s a shoulder or kidney design, enables an angler to apply and maintain an incredible amount of pressure throughout a fight, much more than when simply standing up and fighting. It makes the difference between beating a fish quickly and prolonging the fight, which increases the odds of losing the fish due to angler fatigue, terminal-tackle failure or predation by sharks. Credit goes to the additional leverage these setups provide, enabling anglers to tax their upper back and shoulders (with a shoulder harness) or lower back and leg muscles (with a kidney-style harness) rather than just stand flat-footed and use their arms. Also, during a long fight, a good belt-and-harness combo lets anglers use certain muscles and rest others to pace themselves while maintaining pressure on a fish.

Yet with all the various types of belts and harnesses on the market, selecting the proper one for your type of fishing can be intimidating, especially for those new to offshore stand-up fishing.R

Rick Mola is an ardent canyon angler and owner of Fisherman’s World, in Norwalk, Connecticut (www.fishermansworld.net). Although his shop is stocked with stuff to catch everything from fluke to broadbill swordfish, Mola outfits an impressively large number of canyon-bound boats. When questioned on how to choose the best rod-belt-and-harness setup, he says it comes down to custom-fitting each angler with what feels right to him. “For example, we sell a lot of 50-wide reels filled with 80-pound line and stand-up rods equipped with short, curved butts,” says Mola. “This is a preeminent canyon setup now, thanks to the resurgence of swordfish. So anglers are out there chunking for tuna but also encountering sharks and swordfish. Buying this style of outfit may be one angler who is 5 feet 2 inches tall and another who is 6 feet 5 inches, and both will be looking for the right belt-and-harness setup to handle that outfit. Naturally, the equipment will vary with their comfort levels.”

For a rod belt, Mola says to choose a model that is wide enough to distribute the pressure from the fight across the thighs. For a stand-up outfit, the rod belt must be positioned low, to where it covers both groin and upper thighs, to achieve maximum leverage. “The wider-based rod belts are better at doing this than the lighter, smaller ones,” says Mola. “Smaller belts are fine for light-tackle fishing, but when you step up to serious stand-up gear, you end up being uncomfortable during the fight and even bruising yourself. It’s not worth saving a few dollars at the expense of becoming black and blue and sacrificing a good fight.”

Once a fighting belt and harness have been selected, Mola has his client don the gear. He then hands over a 50-pound-class stand-up outfit and proceeds to make the necessary adjustments for comfort and fighting efficiency by applying 20 pounds of pressure on the rod. “If he begins to stumble about or feel uncomfortable, we’ll try different harnesses and belt combinations and adjustments until he can comfortably stand flat-footed and handle the pulling power,” says Mola.

“Another typical situation is that a boat usually has one or maybe two belt-and-harness combos,” says Mola. “When a big fish is hooked, that belt and harness likely hasn’t been adjusted properly for the angler. Therefore, he fumbles about trying to adjust it on the spot, which interferes with his rhythm. And chances are, even adjusted, it could have been fine-tuned even more had it been done earlier at the dock. That’s why it’s so important for serious anglers to have their own equipment dialed in specifically for them.”

Whether to opt for a shoulder-style or kidney-style harness is personal preference. However, as a general rule, a rod-belt/shoulder-harness setup is best suited to lighter stand-up tackle, i.e., 20-pound, 30-pound and 50-pound class. This option will enable an angler to use his upper back and shoulders to pressure a fish. And during a long fight, the angler can give these muscles a break by pumping with his arms. I’ve used this setup quite a bit, and it really lends an advantage when you’re playing out yellowfin tuna on 30-pound-class or even blue marlin on 50-pound-class gear.

I prefer to adjust a shoulder harness to where the rod is nearly upright so I can reach straight out with my left arm and grasp the foregrip. It’s sort of like an imaginary upside-down triangle, with the rod gimbal and belt the apex, my body and the rod the sides and my outstretched arm the base. With this setup, I merely bow a bit to reel in line and straighten back up to pump the fish and gain line. And should I need to rest those upper back and shoulder muscles, I simply reach out, grasp the rod’s upper foregrip and pump and wind using my arms.

I also carry aboard my boat an AFTCO MaxForce stand-up harness, which is what we put Dave Morel into for that shark battle. Although this is a great setup for light tackle as well, I prefer it for 50- and 80-pound stand-up gear. Some anglers use it with 130-pound gear. The advantage of this harness style, in conjunction with the appropriate rod belt, is that you can exert pressure from not only your lower back but also from your hips and upper thighs. You basically squat and use your weight to exert maximum leverage. What’s more, the sit-in pads are extremely comfortable.

When a fish runs, I prefer keeping my left hand over the face of the reel and my other hand on the reel handle with both shoulder and kidney designs. The arc in the rod from the properly adjusted harness and rod belt maintains pressure on the fish while I simply relax my arms and wait to counter. When it’s time to gain ground, I keep my left hand over the reel and wind as I lean forward to reclaim line. Keeping my hand over the reel also enables me to stop the rod from snapping back into my face should the hook pull or line part. To pump up the fish, I’ll squat backward into the harness, lifting the rod.

Just how effective this type of pressure can be on a fish, when executed properly, was showcased by Morel with that shark. He settled into a fast-paced fight that took its toll on the dusky. Before he suited up with the belt and harness, he couldn’t do much with the fish. Yes, even with the harness, he was sweating and working hard, but he beat a very large predator on a 50-pound stand-up outfit relatively quickly and efficiently.

Despite the excitement of slugging it out with a big, powerful game fish, there’s an inherent danger in being strapped into a harness. Mola maintains that a mate should stay with the angler throughout the fight, standing by to grab him should he slip or lose balance (many harnesses have safety handles on the back for this very purpose). This is especially so when it’s rough and or when the boat has low gunwales. Mola also recommends having a safety line on all big-game outfits. Should the unthinkable occur, the restraint will keep the angler within quick reach of help. And some harnesses have release clips that attach to the reel. It’s a good idea for anglers to keep a knife or cutting tool accessible.

It’s not only going overboard that is a concern, but also falling against a rocket launcher, chair or gunwale should the line part while there is pressure on the fish. That’s why I stood directly behind Morel and had Megan take my place when I needed to grab the wheel. With us standing by him, Morel was not going to go overboard or fall back into the cockpit and injure himself.

No doubt, when there’s a tough fight on tap, nothing helps make short work of a big, powerful, stubborn fish better than a good angler in a comfortable rod-belt-and-harness setup. I saw the scenario play out yet once again off Bimini this past summer. So did Dave Morel.

1. It is critical that the harness and gimbal are properly positioned on your body. The harness should fit comfortably across your hips. The gimbal belt should be positioned across your thighs.

2. Adjust the straps accordingly. When the rod butt is in the fighting belt and the harness is clipped to the reel, the straps should be adjusted so the tip of the rod, when it’s lifted, is at a 60-degree angle.

3. The reel drag should never be too tight. With an 80-pound-class reel, the average person should not set more than 20 pounds of drag for safety reasons. There are exceptions for experienced, fit anglers who often use up to 24 pounds of drag, but they must be careful.

4. Make sure the pin in your fighting belt is maintained. If there is a nut, it should be tightened before each trip. Without the pin, your belt is useless.

5. Test the equipment on land first. It is important to make sure the gear fits well and is properly adjusted to your body. Tie the end of your line to a fixed object, then bend your knees, lean back a little, and keep pressure on the harness and belt and rod and reel for up to a half-hour, which is how long you would likely fight a fish.