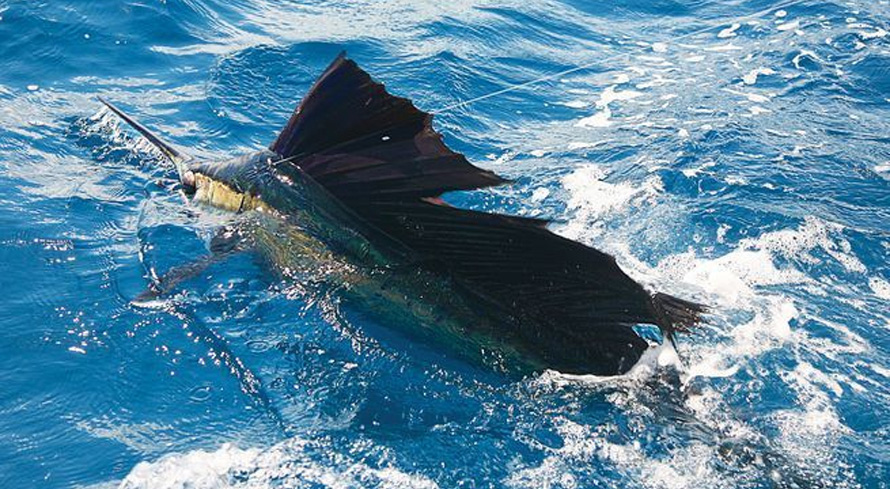 Sight-fishing ranks among the most demanding skillS. Success requires keen eyesight and compensation for wind speed and direction prior to making a precise cast. AND tHERE’S a small window of opportunity to make thAT cast: right when the fish turns broadside or away from the angler. then there’s the fight.

Sailfish are arguably the most dramatic game fish to sight-cast to when they enter the ­shallows. Here’s a big-game warrior bent on gorging itself on schooling ballyhoo, yet a particular fish when it comes to taking one with a hook in it. Then, when fooled, they melt 12- and 20-pound-test line off a spinning outfit like few other fish, wildly launching themselves from the sea. They are both easier and harder to catch over the shallows, depending on the fight: easier if you run up on them and touch the leader for a tournament ­release, or far more difficult with minimal chasing. Either way, it’s a huge accomplishment to sight, bait, fight and release a fish ranging anywhere from 6 feet and 35 pounds to 8 feet and 70 pounds. 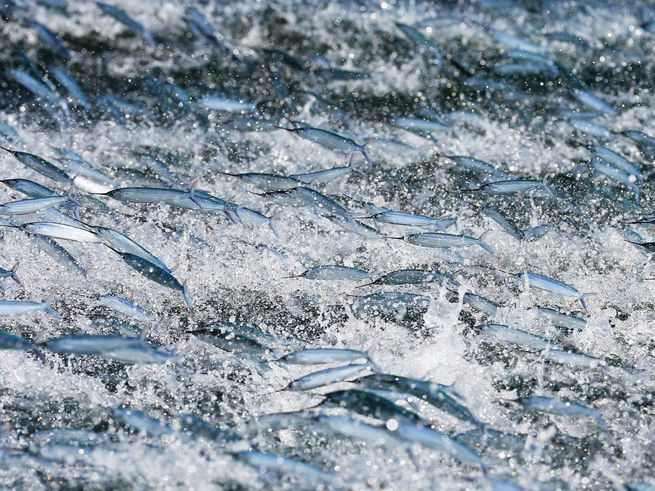 Ballyhoo jump out of the water to avoid a pack of hungry sailfish (above).

The Florida Keys shallows light up with sailfish in the winter, and Capt. Paul Ross continues to be one of the best at the game. When asked what makes the Keys renowned for this type of fishing, especially when sailfish are often taken in bally­hoo schools off the ­beaches of South Florida, Ross cites the sheer abundance of ballyhoo in the Keys during winter, the more expansive shallows, and clear water. “This fishing usually begins around Halloween, when we get one of those hard northeast winds,” says Ross. “It pushes ballyhoo out of the Gulf [and] stacks them in Hawk Channel and then out over the patches. As long as we keep getting the fronts, it stays good through February.” 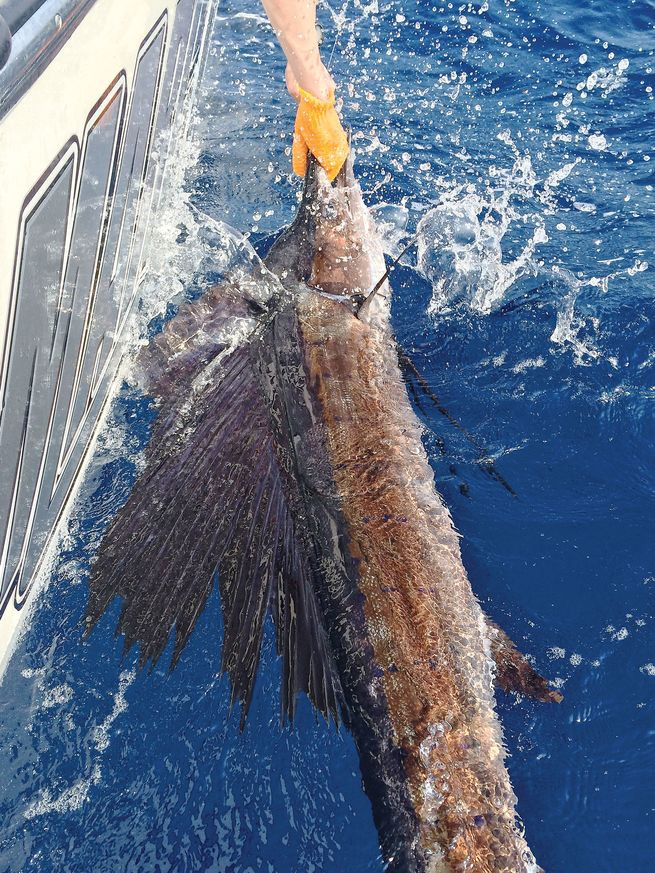 A Keys sailfish is subdued for hook removal and release

Islamorada Is for Sailfish

Ross believes Islamorada is the prime Keys destination for catching sailfish in shallows because of the short runs from the dock to patch reefs around Alligator Reef Light. “We’ve a much tighter area here compared to other parts of the Keys,” says Ross. “This condenses the zones where ballyhoo and sailfish gather. These small areas concentrate them more and make them easier to find. Plus, the water is clearer here. American Shoals, off Key West, sees more sailfish than we do, but they’re spread out over a much larger expanse — that, and any dirty water makes sight-fishing for them difficult, compared to Islamorada.” . 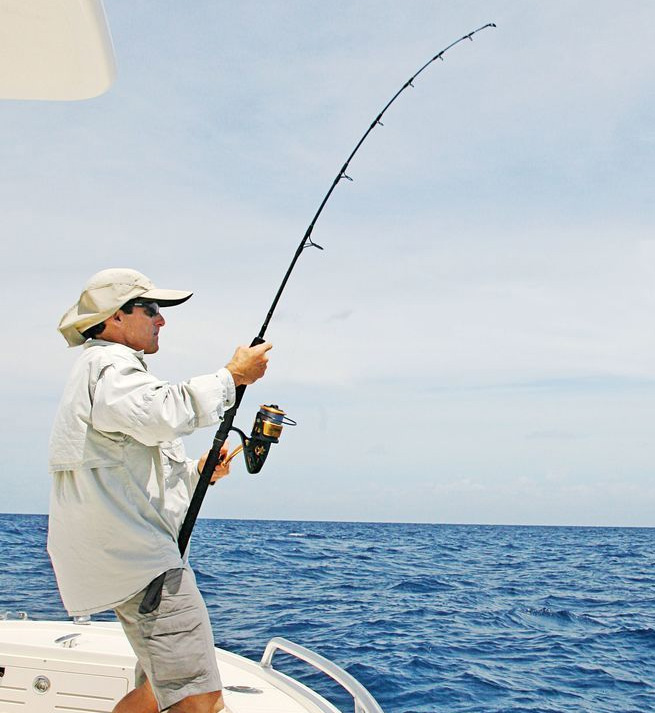 Spinning tackle is ideal to sight-cast for sails in shallow water (above).

Ross prefers an incoming tide and full moon, claiming the stronger tides result in cleaner water, which makes it easier for the sailfish to see their prey and for anglers to spot them. “Throughout the day, these fish move up onto the patches and feed aggressively in blitzes that last for 45 minutes or an hour,” explains Ross. “Then they’ll retreat into deeper water, around that 110- to 120-foot range. I’ll be in the tower and see them working as a group as they move in. Some will be high, some down low. They corral the ballyhoo and feed on them in an organized manner. “When the sails slide out deep, we’ll either kite-fish while waiting on their return to the patches, or slowly ride along in 60 feet, looking for them as they begin staging for their move to the shallows. When we see them here, they may not be quite as aggressive. Sometimes it takes live-chumming to get them going.” Ross explains that the peak rally is generally late afternoon, usually between 4 and 5 p.m. Outside of that, it’s all about watching for periodic blitzes throughout the day. 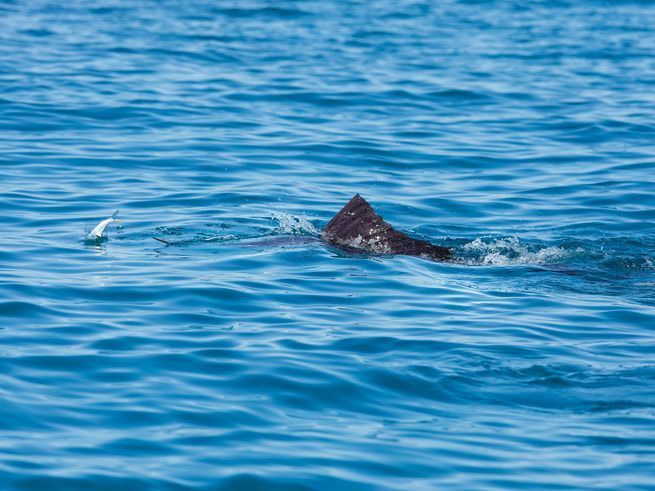 A sailfish zeros in on a ballyhoo over a Florida Keys patch reef.

When sails move on ballyhoo, the halfbeaks will “shower”; that is, they will skip across the surface for several yards or more, organized and in one ­direction. That’s the telltale sign that sails are on them. Short, sporadic bursts, when ballyhoo scatter in various ­directions, are usually ­prompted by mackerel, barracuda or tuna. Given the abundance of bait and selective feeding by the sails, the liveliest of ballyhoo get the best results. Though cast-netting is an efficient way to fill a livewell, Ross reasons that ballyhoo procured by hair-hooking fare better than netted ones, provided they’re handled properly. Even if his livewells are brimming with bait, Ross catches fresher ones for the afternoon blitz. 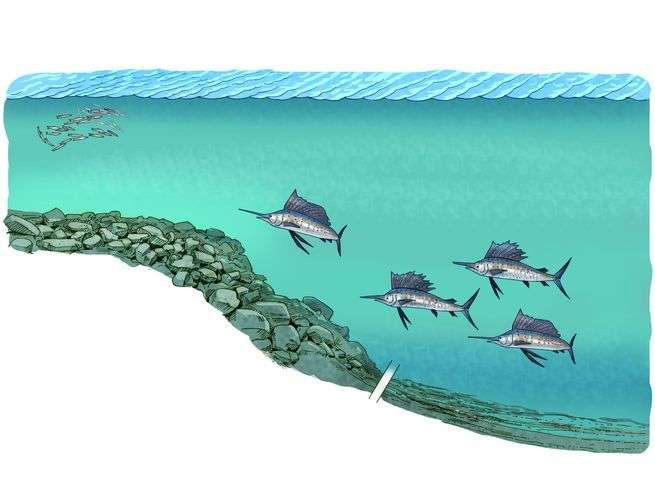 In the Florida Keys, schools of ballyhoo gather over shallow patch reefs from late fall through early spring. Packs of hungry sailfish patrol the edges looking for them, and venture as shallow as 30 feet to launch surprise attacks. Several ballyhoo jumping in unison in the same direction are the classic telltale sign.

Precise casts are essential, and 12- to 20-pound spinning tackle and monofilament lines are top choices. Ross secures several inches of soft copper wire to a 5/0 in-line circle hook, runs the hook point downward through the inside of a ballyhoo’s lower jaw, and tightly wraps the hook shank to the beak with four or five turns of the copper wire. Clear water requires a 30-pound ­fluorocarbon leader. When the fish won’t bite, Ross drops to 20- and even 15-pound-test, the philosophy being that the boat can rapidly back down to the leader and score a legal release before the leader chafes off on the bill. Ross maintains 15-foot leaders — tournament-legal. To attach leader to line, he uses either an Albright knot, a back-to-back uni or a blood knot.

Paul Ross keeps Relentless crawling along at 4 or 5 knots, watching for showers and deep-moving fish. He says “slow is best” because sometimes sailfish rise to a boat out of curiosity. When a bona fide ballyhoo shower materializes, however, it’s like the green flag dropping at the Daytona 500 — everyone races for it. Yet once another boat is on the shower and baits are pitched out, it’s common courtesy not to mug the boat or shower; back off and resume searching. 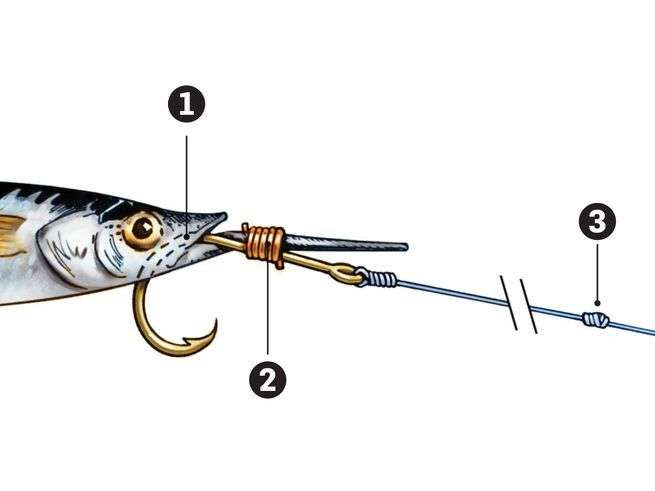 Towers are a huge advantage in this fishery, but Ross says boats without a tower can compete with the big boys: “It happens all the time. Just have a person with a pitch-bait rod in the bow and one in the back. If there’s no forward livewell, keep the ballyhoo alive, rigged and ready to pitch, in a bucket of seawater. As you approach a shower, have the bow-based angler cast ahead of and to one side of the bait shower, and the cockpit-based angler do the same, but to the opposite side. If you cast to the middle of the shower, you’re past the sailfish.”

The same practice holds true for larger boats when baiting showers. In both cases, have multiple rods ready to go, as you’ll likely have as many ­opportunities to pitch at sailfish. When the fishing is hot, expect double-digit catches.

If you’ve yet to experience sight-casting to sailfish in clear, shallow Florida Keys waters, plan a trip to Islamorada. A couple of encounters of this kind might just redefine your concept of sight-casting ­excitement