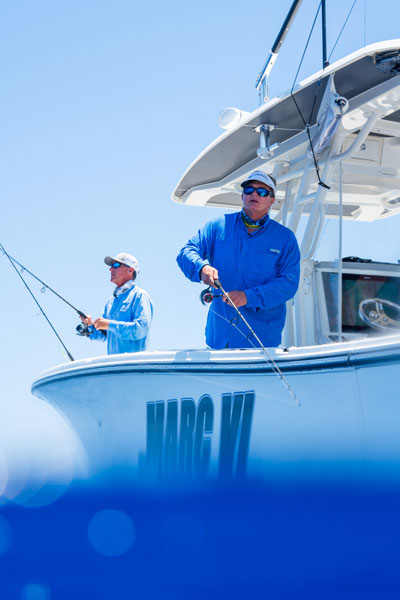 Catching a billfish, large dolphin, cobia and other top tier game fish pretty much transcends into tunnel vision, with sole focus on quarry and angler. However, such a directed focus could actually diminish your catches over the long run. That is, what about a companion fish or two possibly lurking near the hooked one, unnoticed by the crew? And while landing/releasing a trophy catch is certainly an outstanding feat, scoring a double or triple header is even more of an accomplishment. To score those "lurkers", it's time to broaden your outlook.

"SAND MAN" LIEDERMAN - Designating a second angler to cast a bait behind a hooked fish is a proven way to score companion fish, be it for personal satisfaction or running up releases during sailfish and white marlin competitions. Jeffrey Liederman is an accomplished billfishing authority and team member aboard Sand Man, a 63' Spencer based out of Miami. He's a big proponent of the tactic. "When our team hooks a sailfish, I always assume there's at least one more with it, or maybe two or three, or maybe even ten," says Liederman. "That's why we keep as many baits in play as possible when fighting a fish, from kites, flat lines and even pitch bait rods."

For sailfish, Liederman prefers spin tackle, 16 lb monofilament line, 15' of 30 lb fluorocarbon leader and an in-line circle hook. "As far as where to cast that second bait depends on what the hooked sailfish is doing," says Liederman. "In a perfect world, I'd like for that bait to land right where a sailfish crashes into the water after a jump. The splashing and the regurgitation from the sailfish excites others into feeding - even on expelled stomach contents. So, when a frantic live bait suddenly appears, they're all over it."

"If a companion fish isn't seen, and the hooked sail is ten to 15 feet deep, for example, another trick is to throat hook the bait, which forces it downward. Since it has to reach the hooked sail, cast on top of it and behind the fishing line. By the time the bait gets down there, it should be just beyond the sailfish's tail and in a perfect ambush spot for deep followers. Pitching baits near hooked fish can be a game changer; it's proven itself time-and-time again. It turns one bite into more."

"JUMPIN' JOHNNY" AND THE WHITES - Very similar to South Florida salfishing, white marlin doubles and triples often come from pitch baiting to hooked fish. "Jumpin'" John Oughton is a veteran at catching white marlin off Ocean City, Maryland. "As far as sending a second rod into action for our white marlin, it will be one of our flat lines," reports Oughton. "When I hook a white, I'll put the boat into a wide turn toward the side of the hooked fish. By doing this, the rest of the trolling spread stays in play along the outside of the turn, leaving me clean water to drop back the flat line on the inside path of the turn. We'll free spool the bait back toward the hooked fish. Roughly 60 to 70-percent of the time, we'll pick up a double that way."

"An offshoot of this tactic is what we call "prospecting", says Oughton. When we're trolling in a fishy looking area, we'll repeatedly drop a bait back and retrieve it, playing off the dredges. We strive to make it look like a bait which separated from its school (dredge). It continues to be very successful for white marlin, especially those we don't see lurking back there."

THE FUN FISH PITCH - Casting for companion fish isn't solely for the billfish crowd. Quite the contrary. For example, when a sizeable dolphin is hooked, be it a cow or bull, pitching a bait behind it could score its mate, even if it appears nothing else is around. Simply cast the bait toward the tail of the fish, free spool, and remain ready for a pick up. If nothing happens, re-cast the bait, free spool some more and place the outfit in a holder. Companion fish sometimes hold well off to the side, or deep. The commotion from the hooked dolphin jumping, fighting and eventually being landed might excite any companions into eating, or even attract a fresh push of fish. Many times, it's the gunwale rod that scores, surprising everyone focusing on the hooked fish.

FOOLING KINGS - King mackerel are notorious for stalking hooked members. Yet, they're rarely sighted due to relatively deep fights. The franticness of a hooked king excites others to bird-dog it, looking to intercept its meal or feed on any scraps. Toward a fight's end stage, pitch out a second live bait toward the hooked king, or a flutter jig. Prepare for a sudden strike. It's the same when strictly jigging for kings; as one is played near the boat, drop a jig beneath it and radically work it. The strike should be almost instantaneous.

TIPLER ON THE WRECKS - Captain Andrew Tipler is a Cudjoe, Florida Keys, shallow-water and wreck-fishing specialist. He says to never discount the odds of a companion fish or two stalking a hooked one, permit being a prime example. "Wreck permit travel in large schools and it's not uncommon to have a single or pair follow one being played near the boat, at least to where they're close enough to be seen," says Tipler. "They're fast-moving, so if you're not ready to capitalize on a second fish, it will be long gone by the time a second outfit is baited and cast out. Have a friend poised with a spinner loaded with a crab. Even if a second fish isn't seen, have that person cast behind the hooked permit and allow the crab to drift."

Tipler says there are two key chances to double up on permit. The first is when a school is spotted. He suggests casting the primary outfit, followed closely by the second one. "What happens in this scenario is that once a permit is hooked, it startles the school," says Tipler. That's why it's crucial to try for that second hook-up in rapid fire succession, right after the first bait hits the water. The permit will then settle after a while. The second opportunity for a double may present itself when the hooked permit is nearing the boat, say like 30 or 40 feet from it. This is when the second bait should be presented."

Cobia are yet another "social" fish around wrecks. "Cobia are notorious for following a hooked companion," says Tipler. "Be ready; for once a cobia rises to the surface, others may be with it. Regardless, cast a bait behind the hooked cobia and let it drift. Even when the cobia is deep and being played up, free spool a second bait straight down to it. A live bait on a knocker rig or even a white deep jig is ideal for this. Action breeds action."

A bit of a different fishing scenario, cobia often hang on bull sharks. "If one is accidentally hooked, don't treat it like a lost cause", says Tipler. "Be prepared, for once that shark appears, it may present a golden opportunity to catch a cobia, maybe several of them. Bull sharks and cobia seem to go hand-in-hand. If bull sharks are on a wreck, cobia are bound to be with them."

A tactic increasing in popularity is to catch a bull shark on heavy tackle and look for cobia as the shark is being played to the boat. You just need a strong volunteer to battle the shark, a main caster, and a back up player.  That's all part of playing the numbers game!