Treasure Cay is a Bahamian hot spot that provides anglers with plenty of fishing options.

The Abacos have long been known as a premier Bahamas big-game destination, a place where blue marlin - some of the biggest in the region - and schools of large dolphin migrate each spring through early summer. Actually, some of the largest blue marlin tend to show up here toward the end of June and beginning of July, extending the trolling game a bit for die-hard bait- and lure-draggers.

When the waters cool with the arrival of winter, wahoo - often loads of them - make their run along the islands, setting up some fast fishing between Thanksgiving and March. These fish aren't the monsters that invade San Salvador, but there are lots of 20- to 40-pounders, with the occasional 50-plus-pounders in the mix. It's more of a numbers andaction game.

Fishing pressure here is minimal during the winter, and that suits Capt. Joe Trainor of the Over Under Charters team just fine. For the past three years, Trainor, who runs out of the Treasure Cay Hotel Resort & Marina between November and March, has had remarkable wahoo fishing almost all to himself here. "It's an easy place to get to, and the fishing is excellent," says Trainor. "The runs to the fishing grounds are short, so we spend more time fishing. Plus, there is no shortage of things to do on land here, so it appeals to anglers who wish to bring their families along."

I recently took a trip to Treasure Cay, Great Abaco, and spent a fun day of fishing with Trainor. I brought along my cousin, Terry Flora, who would be one of the designated crankers. It was early July, a period considered dead by Abaco standards. As is usual in late summer, only a handful of boats remained in the marina, with the serious marlin-fishing machines having left in search of greener (make that bluer) pastures. Yet, like winter here, summer offers a lot fishing-wise; one just needs to know where to look.

The bottomfishing during hot and sultry months can be fast. I have bottomfished in the Abacos many, many times and know just how good it can be. In fact, the largest grouper taken to date on my boat remains the 68-pound black taken by Joe Skorupa off Walker's Cay many moons ago. I've enjoyed good action with large yellowfin, black grouper, muttons, yellowtail, and even amberjack and horse-eye jack. At times, the most impatient angler can stay busy catching bottomfish.

And bottomfishing is what we planned to do on this day. Trainor anchored in 20 feet of water, still inside the Sea of Abaco. He has spent days just idling about and using his fish finder - and even snorkeling - to uncover prime bottom. Much of it he located in the Sea of Abaco, which can be fished when high winds make it too tough for the offshore reefs. We planned on hitting a series of sharp ledges, rocks and sea fans within these relatively shallow waters even though it was calm offshore.

Hot Time in the Abacos

I'd fished before in the same general area where the Over Under 54-foot Bertram was now anchored, using pretty much the same tactics. On that particular outing, we got a few big grouper - one weighing close to 20 pounds - lost some brutes we couldn't keep out of the bottom and released several big horse-eye jacks, among other species. On this trip, Trainor put out a block of chum and then readied the 8-, 12- and 20-pound spin tackle for yellowtail, muttons and grouper, respectively. We were spooled with 50-pound line for baiting large grouper. There was nothing fancy in the bait department, just a smorgasbord of squid, ballyhoo and mackerel. The knocker rig (a sinker riding on top of a hook) was the main terminal setup, save for small jigs tipped with squid and ballyhoo strips for the yellowtail.

Just days earlier, on the full moon, Trainor had done a bang-up job on the mutton snapper. His largest scaled 15 pounds, and his client lost one near the boat that was even bigger. The mutton bite on the moon can be off the charts, and Trainor and his clients were there taking full advantage of it. "The mutton fishing here is wild when it happens," says Trainor. "You can count on it during the full moons of April, May, June and sometimes even July. And you can't overlook the yellowtails either. They sometimes show in large golden balls right behind the chum bag. And they're quality-size 'tails, with some of the bigger ones pushing 4 pounds."

In addition to muttons, yellowtail and grouper, cero mackerel and a host of smaller bottomfish joined the mix. I watched Trainor fight what acted like a mutton snapper on a 20-pound-class spinning outfit. But we were shocked when that "mutton" came into clear view and turned out to be a huge margate. In this type of fishing, one should always have an outfit standing by to take advantage of what might pop up in the slick. Fortunately, we were prepared for the trio of amberjack that suddenly swam up the chum line. I free-spooled a split-tail ballyhoo back to the AJs and teased them a bit by jerking on the bait until one engulfed it. The other two fish remained by the hooked one. When I played my fish near the transom, Flora pitched a bait to the followers and hooked one. Unfortunately, the jack swam out, turned belly up and floated to the surface. Rather than let that fish go to waste, mate Josh Chance dove into the water and swam it back to the boat, where it would be iced down and later eaten. When the second amberjack neared the transom, we baited the third fish. We unhooked Flora's fish, revived it and turned it loose. Unfortunately, it did the same thing as the other AJ. Chance was about to jump in once again to rescue the ailing amberjack when a big barracuda passed off the transom and forced him to pause. And it's a good thing he did. A minute later, three big sharks blitzed the floating amberjack. In a frenzy of white water and blood, the sharks devoured it in less than 30 seconds. You have to wonder what might have happened had Chance dove in and towed that jack back, but you don't have to wonder too hard. 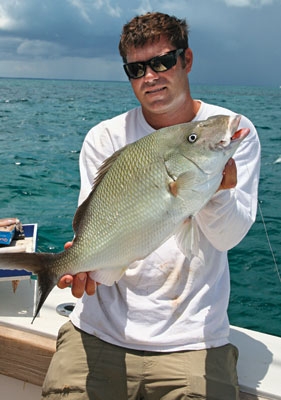 Even our third amberjack came up exhausted, so we boated it for food. Our haul for the day included yellowtail and mutton snapper, amberjack, margate, grouper, untold grunts, sharks and - of course - barracuda.

Chill Out at Treasure

With winter now upon us, Trainor will be soon be trolling for wahoo off Treasure. His spread consists mainly of a combination of skirted ballyhoo, feathers and large swimming plugs. He trolls a zigzag pattern between 150 and 600 feet. His biggest winter wahoo to date off Treasure, caught by a 10-year-old boy, weighed 91 pounds.

You can be sure fishing off Treasure Cay isn't boring, regardless of the season. From blue marlin to wahoo and from snapper to grouper, all the players are here. For those in midsize center consoles like mine, it's really not difficult getting here. In fact, numerous midsize and large outboard-powered boats make the run each spring and summer.

For those who would like to experience Treasure Cay the easy way, hop on a Gulfstream International Airlines flight from either Palm Beach or Fort Lauderdale, Florida, and hook up with the Over Under Charters' 54-foot Bertram. The only thing that won't be so easy will be the cranking. And you can bank on doing a lot of that whenever you come here - unless, of course, you decide to sit back, relax and snap a few pictures! 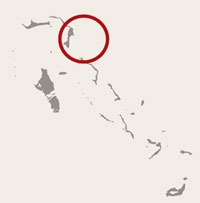 What: Light-duty bottomfishing for yellowtail and mutton snapper, groupers, amberjack and cero mackerel.

Who: Over Under Charters specializes not only in bottomfishing excursions here but also in wahoo, dolphin and marlin trips. 866-682-8862; www.overundercharters.com

Over Under Charters is a premier outfit that offers fishing trips to some of the best big-game destinations in the United States and Bahamas, like Key West, Islamorada and Fort Lauderdale, Florida; areas in North Carolina, Maryland and New Jersey; and Rum Cay, Cat Island, San Salvador and Treasure Cay, Bahamas. For a complete listing of the boats and captains, as well as fishing reports, visit www.overundercharters.com or call 866-OUA-TUNA (866-682-8862).

Gulfstream International Airlines offers flights from West Palm Beach and Fort Lauderdale to both Treasure Cay and Marsh Harbour, as well as other destinations in the Bahamas. Visit www.gulfstreamair.com, or call 800-231-0856.