Over the years, I’ve enjoyed hundreds of incredible fishing trips, many of them documented in the pages of Salt Water Sportsman and on my ESPN2 & now VERSUS television series - George Poveromo’s World of Saltwater Fishing. It’s funny, but the memories of all the good fishing adventures sort of blend together over time. It’s the misadventures I just can’t seem to forget about, no matter how hard I try. I’m not sure why, but I can recall every single moment of those outings gone bad as if they happened yesterday. You know the kind I’m talking about: the ones that cause you to sit back, reflect on what happened, and share a few laughs – if you were fortunate enough to survive! My friends and I refer to these trips as “character builders,” and we’ve had some real winners.

One such trip occurred in June, 1992, when we decided to venture some 100 miles offshore, due east of Cape Canaveral, Florida. Our destination was a NOAA weather buoy anchored in 2,730 feet of water that transmitted information such as air and water temperatures, wind velocity and direction, and sea height to the NASA Space Center. Positioned beyond the Gulf Stream’s eastern edge, the buoy served as a magnet for many species of game fish, which fed on the concentrations of baitfish that gathered around the floating structure and its mooring cable. 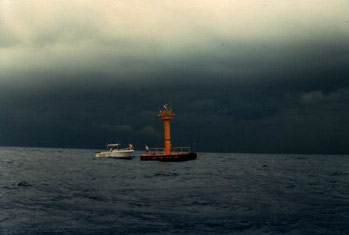 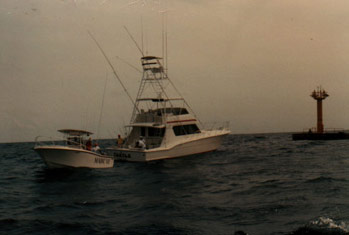 It was stories of the yellowfin tuna at the buoy that had prompted me to plan the trip. I had talked friends Mark Bradfield, a Palm Beach personal-injury attorney, Jack Harari, an emergency-room physician in Boca Raton, and Casey Lynn, a technician with a major outboard manufacturer, into joining me aboard my Mako 261, MARC VI. In addition, friend Danny O’Neill would accompany us in his Mako 261, SPIN OFF. Danny’s crew would consist of Chuck and Billy Gerlach, and Bill Munro of Ande Monofilament.

Before the storm - the MARC VI takes on fuel.There was just one problem: our boats didn’t have the fuel capacity to run 100 miles offshore, troll all day, and run 100 miles back. We solved that problem, in part, through the help of Barry O’Neill, Danny’s father. Barry had talked his friend Al Levenson into taking his fifty-five foot Hatteras, the TURTLE, along as a mothership. Barry would fish with Al aboard the Hatteras, with veteran South Florida captain, John Simes, at the helm.

The plan was to load the Hatteras with several fifty-five gallon, Department of Transportation-approved drums full of gasoline to serve as the fuel supply for the Makos. We would run to the buoy early in the morning, fish all day, take on fuel, have dinner about the Hatteras, and spend the night offshore. We’d fish at night and be on the troll by first light, returning back to Port Canaveral Inlet by late afternoon.

THE DAY BEFORE THE RUN

After days of preparation and planning, the boats finally set forth from South Florida to our launch site in Port Canaveral. I trailered my 261, while Danny and Levenson traveled by water from Palm Beach. After docking at a local marina, we checked into our rooms at a Holiday Inn, showered up, and headed out for a bite to eat. I must admit that I didn’t enjoy dinner very much. This wasn’t due to any lack of quality food or lively conversation; rather, it had more to do with the stiff wind that had materialized.

Back at the hotel, I watched the weather report on TV. NOAA was calling for a 15-knot breeze from the west with seas ranging from two to four feet and a sixty percent chance of thunderstorms.

Sure enough, the breeze was due west when we convened at the marina at 7:00 AM and discussed the situation. If we were making a local trip off South Florida, we would have called it off right there. A west wind in Florida usually means unsettled weather. Either a late-season front is on the way or there’s a pressure system locked in place. Neither scenario is particularly encouraging when you’re about to run over 100 miles offshore in two twenty-six foot center consoles. However, since so much planning and preparation had gone into this trip, I decided that we should at least venture out ten miles or so and see how things looked.

A west wind is misleading, at least on the eastern side of Florida. We cruised downsea in two to fours, enjoying a remarkably smooth ride. When we reached the ten mile checkpoint with no problem, we decided to proceed another ten and make our decision then. At twenty, we decided to push on to thirty, then forty. At fifty miles, we were committed. Onward to the buoy!

I felt excitement rekindling in me, and it was comforting to have Danny’s Mako running alongside and Levenson’s Hatteras not too far behind. There’s something to be said about the peace of mind a large sportfisherman brings when you’re far offshore in a small boat. It was a feeling that grew stronger at the trip progressed.

YELLOWFIN IN THE BOX!

The seas were a steady four feet and peppered with weeds when we first caught a glimpse of the buoy. We were all fired up as we closed within a mile, slowed to trolling speed and dispatched a spread of plain and skirted ballyhoo. The weeds made it challenging to pick a route that didn’t foul our baits, but we soon discovered a clear lane on the buoy’s northern side. On the first pass we boated a 40-pound yellowfin and a pair of dolphin, while the TURTLE followed with a wahoo.

The quick action soon faded into an uneventful afternoon thanks to the west wind and lack of bait. Even the sargassum mats eventually disappeared. The seas flattened by 6:00 PM, allowing us to slip easily behind the Hatteras and refuel.

Just before dark, the eastern sky began to turn ominous, exhibiting the one thing you don’t want to see 100 miles from land: lightning. Simes radioed us to say that his forty-eight mile radar showed a thick band of storms moving in from the east, and that bad weather was inevitable. He also volunteered to help us knock down the seas by putting his bow into them and letting us tuck in behind him.

I vividly recall watching that solid black storm front making its way toward us and thinking how lucky we were to have taken on fuel. As the thunder grew louder, we laid down the outriggers, fishing rods and antennas, and donned our life jackets. It was going to be a wild ride aboard our twenty-six foot boats. 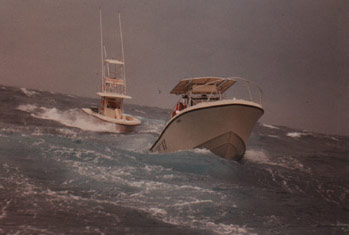 The storm front hit us with gusty winds and seas that went from calm to ten feet in about five minutes. With the bow of our Makos pointed into the seas some twenty feet behind the Hatteras, Danny and I held steady. Lightning was flashing all around us and the loud claps of thunder only kept us more on edge. A cold rain was driving hard into the cockpit, and it soon found a way through my foul-weather gear. Somehow I managed to zone out the elements and concentrate on using just enough throttle to keep the MARC VI pointed into the seas. Occasionally I’d catch a glimpse of Danny’s boat either going airborne as he left the top of a wave or driving into the trough. My crew wasn’t having fun, and no one said a word.

The front passed after forty-five minutes, leaving us with a light rain, a steady breeze and a wind-whipped ocean. But we were okay. However, the Turtle’s radar revealed more squalls moving toward us from offshore. We decided to play it safe, and embarked on a dark, seven hour run back to the port. With any luck, we’d stay ahead of the next squall line.

With the Hatteras running behind us and keeping track of our position on the radar, Danny and I took off for home. The seas had dropped to a manageable six feet, yet it would still be a tough haul. Danny got the jump on me and settled into a comfortable groove. I tucked in behind him and used the seas he had knocked down to close within fifteen feet of his transom.

I’ve always been uncomfortable with following directly behind another boat, and this night was no exception. Call it a premonition, but I suddenly had the urge to break out from behind Danny’s Mako and run alongside of him, which I did. Five minutes later, Danny’s boat landed hard coming off a wave, causing Chuck Gerlach, who was standing behind the rocket launcher, to lose his balance. Gerlach ended up in the boat’s splash well, hurting his ribs in the process. If it wasn’t for the splash-well door and outboards, he would have gone overboard. And if that had happened while I was following right behind, he might have been killed. That’s why I don’t cruise behind other boats. 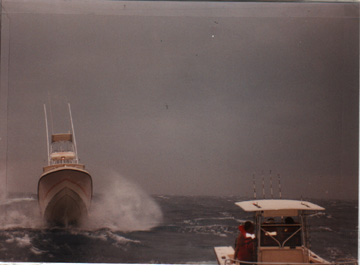 Once we made sure Chuck was okay, it was back to navigating the seas, guzzling Coca Cola to stay alert. The highlight of the run back was watching the GPS count down the miles to the inlet. Our enthusiasm picked up a notch every ten miles. When we hit the fifty mile mark, I told my crew that this was just like our typical run back to Miami from Bimini. At thirty miles I joked that this was just like our typical summer run offshore for dolphin. At twenty miles it felt as though we were just offshore, and when we hit ten miles to go, we felt close enough to swim to shore. Our trip was finally winding to a close, and not a minute too soon.

WOULDN’T YOU KNOW IT!

Battered and exhausted, we limped to the boat ramp and hauled my boat, then headed to the Holiday Inn for hot showers and some much-needed sleep. When we arrived, we were told that the hotel was sold out, save for one room. I took it and had two rollaway beds brought in. When I jumped in the shower, I had discovered why the room was still available: there was no hot water! Too tired to argue with the front desk, I clenched my teeth, took a cold shower, and collapsed on the bed for four hours. By the time we checked out the next morning, the wind was blowing twenty-five knots.

A few months after our trip, the NOAA buoy broke its mooring and drifted into the Atlantic (it was later replaced with a smaller buoy). I wish I could say that I miss that buoy, but I’d be lying. Our terrible experience had filled me and every member of our group with a strong animosity toward the fabled Cape Canaveral buoy. But that still didn’t make the trip any less memorable. Character-builders. You’ve got to love them!