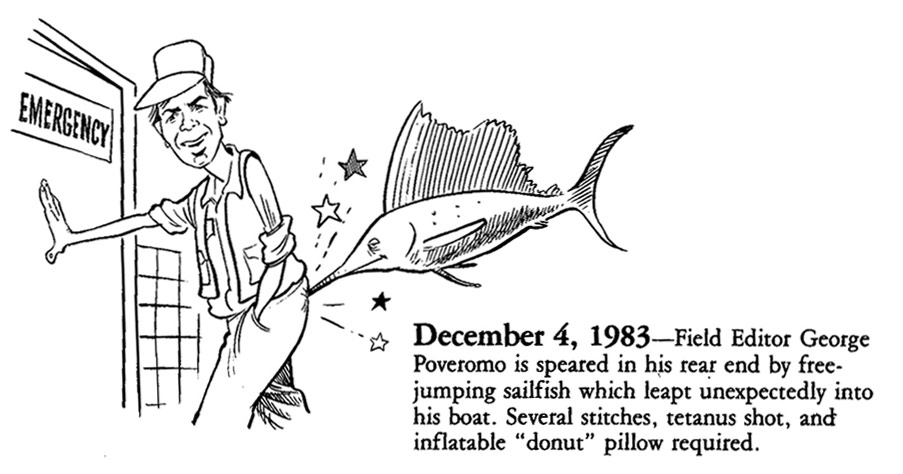 It was a bitter cold February morning in West Palm Beach, a “biting” 42-degrees, to be exact. Add in a 15-knot north wind and it was even worse on the water. Nonetheless, we knew the sailfish would be snapping, and I felt very comfortable about our odds, as well as being bundled up in five layers of clothing. This story dates back to December 4, 1983, when I was still living in North Miami. At 2:30 a.m., I trailered my 25-foot Mako north to Fort Lauderdale, picked up a fishing buddy, and – per tradition – proceeded to a local Denny’s, where we’d have some hot coffee and breakfast. Our goal was to arrive at the boat ramp in West Palm Beach no later than 5:00 a.m., launch the boat, catch live bait, and get to fishing just as the sun was rising. All had gone as expected and our lines were in the water by 7:00 a.m. Around 8:00 a.m., I hook up with our first fish of the day - a sailfish. Now, sailfish are very fast and acrobatic and it’s nothing for one to blaze off 100-yards or so of fishing line off a reel. This fish was no different, as it began tail-walking toward my MARC VI. My knees pressed firmly against the gunwale, I reeled in line as quickly as I could, to remain tight to the fish. What happened next was unimaginable.

About 10 feet from the boat, the sailfish leapt high into the air – and right at me. This, I’m sure, wasn’t an intentional “attack” on the fish’s part, but rather the sailfish simply doing what it does best – and I was just in its way! Talk about pure dumb luck! I was looking up at this fish, as it was coming down at me – bill first! My life suddenly went into slow motion. I remember proceeding to turn my body and run out of the way, and the fish landing - bill first - into my right butt cheek. I hit the deck, stunned. The fish flipped wildly on my back and around the cockpit, and then over the gunwale and back into the water! Stunned, and laying face down on the deck, with my arms still covering and protecting my head from the beating this fish was giving me, I heard my friend shout; “George, your rod – grab your fishing rod – the fish is still on!”. Instinctively, I reached out and grabbed my fishing rod and stood up, totally shaken. I now felt warm fluid running down my leg. I knew I was hurt, and bleeding. I continued fighting the fish for another 10 or 15-minutes, until I finally had it alongside the boat. My friend helped me take the hook out of the fish, and we released it unharmed (though at the time I really wanted to kill it!). Still in shock, I made my way to the bow of the boat with a First-Aid kit. I dropped all five layers of clothing, only to see this deep gash in my right cheek. I cleaned the wound with Hydrogen Peroxide, squeezed a lot of Neosporin into it, and, after wiping up all the blood, placed several bandages over the wound. I pulled up all my pants and resumed fishing. We went on to enjoy a good day, catching and releasing five sailfish.

By the time I got back home to North Miami, washed and put away the tackle and boat, showered and had dinner, it was 10:00 p.m. I went to bed right after dinner. I was laying in bed watching the Tonight Show when - all of a sudden - it felt like someone took a blow torch to my rear end. Edie, my wife, wanted to know what was wrong and I showed her. She freaked out when she saw the wound and drove me to the Emergency Room at Parkway General Hospital, despite my objections.

In Miami Dade County, it is “Law” that hospital emergency rooms report all puncture wounds to the police (for in case you get shot robbing a 7-11, they’ll find you a lot sooner!). We arrived, and reported to a woman working the front desk. I explained what had happened, and she said – in very broken English – “My God, I did not know sailfish bite!”. I took five minutes to explain that they indeed do not bite, but rather have this sharp bill they use as a sword, to help them feed and defend themselves, and that I was accidentally “poked” by the bill of this fish. She replied – in very broken English – “I must tell my grandchildren that they must also watch for sailfish when they go swimming at the beach. I told them all about watching for sharks and barracuda, and now they must beware of sailfish.” I just nodded my head in agreement, filled out the hospital and insurance forms, and took a seat - being very careful to put all my weight onto my left cheek. I was in the waiting room for about 30-minutes, when – just as if I was being baited for a Candid Camera or “Punked” stunt - out comes this remarkably attractive nurse. She calls: “Mr. Poveromo”. I raise my hand. We end up in a room, where she proceeds to review my chart. She asked: “What’s the problem?”. Now, how do I explain what just happened with any sense of dignity, or at least in a way that would not “tarnish” that “tough” fisherman image?! I chuckled, sort of like a tough guy, and said: “I got speared in the rear end by a sailfish”, and chuckled some more. Yep, that was really “manly”, and I’m sure she thought I was the second coming of Humphrey Bogart!

She then requested that I drop my drawers and lay belly down on the table, - which I feared was coming, but did anyway. She took one look at the wound and explained that this would be a job for the doctor. She left, not the least bit amused. A few minutes later, in walks the doctor. He took a good look and asked: “What happened here”? I told him. He asked: “When did this happen”?. I explained around 8:00 a.m. that morning. He then became upset and said: “And you waited until now to come in here?! What’s wrong with you!? He proceeded to lecture me about all the bacteria these fish have on their bills from “whacking” other fish, and how that bacteria could have easily gotten into my blood stream and caused serious harm. He cleaned out the wound, stitched it up with several stitches, and gave me a tetanus shot (which hurt more than the sailfish bill in my butt!). I went home, where I had to use a doughnut pillow for a solid week when I’d sit, to “soften” the pressure on my cheek. The fish’s bill had gone through five (5) layers of clothing (my underwear, two pairs of thermal underwear, jeans and my foul weather pants - which, without question, all softened the blow). But the frightening thing was that if you took a length of string, held one end on my wound, and brought the other end of the string around to my front side, that fish would have scored a Bull’s Eye – had I not turned before it struck me. Perhaps it was indeed my lucky day? To this day, I carry a distinct scar on my right butt cheek from that sailfish. And I’m kind of bummed, just knowing that a career in “streaking” will always be out of the question, as I’d be way too easy to identify.